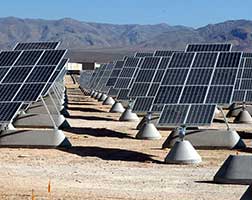 California’s big push into clean energy is seeing results as the state became the first with at least 5% of its overall electricity coming from large-scale solar projects last year.

That’s according to a new study from the U.S. Energy Information Administration, which said Tuesday that the Golden State more than doubled the %age of its overall electricity production that comes from utility-scale solar power. (Utility-scale solar plants are those that generate greater than 1 megawatt.) California’s solar output grew from 1.9% of the state’s total electricity in 2013 to 5% last year as the state generated a record 9.9 million megawatthours (MWh) in 2014 — up from 3.8 million MWh a year earlier.

California was followed by Arizona and Nevada, both of which generated 2.8% of their total electricity from big solar plants. Of course, abundant sunshine helped those states. But even northeastern states like Massachusetts and New Jersey cracked the top ten list, according to the EIA.

New Jersey came in fourth with 1% of its electricity from solar plants. North Carolina, where Duke Energy recently committed $500 million to build three solar farms, placed fifth with a solar output of 0.7%. However, the EIA also found that a total of 36 states had no meaningful solar output last year.

In fact, businesses have increasingly pushed into solar power, which is expected to surpass traditional fossil fuels in coming decades. Solar City  SCTY -1.88% , the solar power systems company founded by Tesla CEO Elon Musk and his cousins in 2006, has seen its market valuation grow to nearly $5 billion.

The renewable energy movement is especially strong in California, where the state government has pledged to generate at least one-third of its overall electricity from renewable sources — including solar as well as windpower and biomass energy — by 2020. The state recently unveiled two of the largest solar photovoltaic plants in the world, the Topaz and Desert Sunlight plants, each of which will have the capacity to produce 550 megawatts.

California’s current historic drought has made it all the more necessary for the state to turn to renewable energy sources other than hydroelectric power, which the EIA said was off by 46% last year compared to the state’s five-year average – Fortune.com