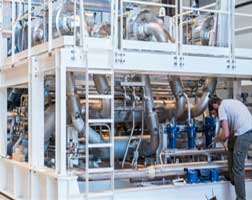 The technology, developed by Air Liquide and based on the Turbo-Brayton principle, reliquefies LNG (liquefied natural gas) boil-off on vessels transporting that product, thereby significantly reducing GHG emissions during transportation, and thus reducing their environmental impact. The approximately 50 Turbo-Brayton cryogenic units sold have the potential to avoid more than 240,000 tonnes of CO2-equivalent emissions per year. This equipment is designed to be installed on LNG carriers, both on newly built ships and for retrofitting existing vessels.

This Air Liquide technology was first used in the space industry to cryogenically preserve biological samples on the International Space Station (ISS), before being adapted for the maritime transport industry. It can also be applied to biomethane. For example, it is used to liquefy biomethane generated through the anaerobic digestion of household and agricultural waste. In liquid form, the biomethane can be transported easily to its point of use, as a fuel in NGV stations (Natural Gas for Vehicles) or in ferry terminals. Air Liquide has sold two such units in the Nordics.