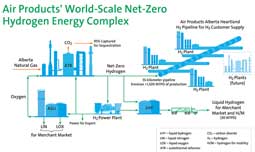 Air Products, the world leader in hydrogen production, and its subsidiary Air Products Canada Ltd., in conjunction with the Government of Canada and the Province of Alberta, will build a multi-billion dollar plan to build a landmark new net-zero hydrogen energy complex that will make Edmonton, Alberta the centre of western Canada’s hydrogen economy and set the stage for Air Products to operate the most competitive and lowest-carbon-intensity hydrogen network in the world.

Canada’s clean energy diversification strategy and regulatory framework make clear that hydrogen is a key enabler for carbon neutrality by 2050. Aligned with that vision, Air Products began work in 2018 on the core of this world-scale energy complex in Edmonton, which will begin with a transformative $1.3 billion (CAD) net-zero hydrogen production and liquefaction facility expected onstream in 2024. This project has been approved by Air Products’ Board of Directors, subject to final completion of the agreements contemplated in signed Memorandums of Understanding between Air Products and Canadian authorities, and with appropriate permit approvals. This development is consistent with Air Products’ growth strategy of executing global megaprojects that enable a transition to a cleaner, more sustainable energy future.

The project relies on an innovative combination of well-established technologies to jump-start an ambitious transition to carbon neutrality. It will take advantage of Canada’s abundant and low-cost natural resources, extensive infrastructure, highly skilled workforce, and innovative spirit to be a model for other jurisdictions around the globe.

“We sincerely appreciate the support of the Government of Canada, the Government of Alberta, Invest Alberta, the Mayor of Edmonton and Edmonton Global. We are proud to expand our presence in this dynamic region, where we have found a vision for decarbonization that mirrors our core values,” said Seifi Ghasemi, Air Products’ Chairman, President and Chief Executive Officer. “Sustainability is our pathway to growth and central to Air Products’ business every day around the world. By being a first mover and investing in this innovative landmark project, we are paving the way for hydrogen from Edmonton to meet industrial and transportation needs throughout western Canada. Our highly integrated project will be a model for net-zero atmospheric gas, hydrogen and power production consistent with our announced growth platforms.”

Air Products will deploy advanced hydrogen technology and innovative design to deliver net-zero emissions. The new facility will capture over 95% of the carbon dioxide (CO2) from the feedstock natural gas and store it safely back underground. Hydrogen-fuelled electricity will offset the remaining 5% of emissions. The clean energy complex will help refining and petrochemical customers served by the Air Products Heartland Hydrogen Pipeline to reduce their carbon intensity. The complex also marks a first in the wider use of hydrogen in Alberta, enabling the production of liquid hydrogen to be an emissions-free fuel in the transportation sector, and to generate clean electricity. This is expected to have a positive impact in lowering Alberta’s carbon emissions.

Air Products, already Canada’s leading hydrogen supplier, is also considering further investments in both existing and new hydrogen facilities in Alberta and across Canada, helping customers improve their sustainability performance while bolstering the hydrogen economy and Canada’s energy transition. The Edmonton project site was strategically selected to permit expansion of the energy complex, including replication of net-zero hydrogen production assets to meet growing demand. Air Products’ existing Heartland Hydrogen Pipeline network was designed for growth and has the capability to more than triple current volumes. 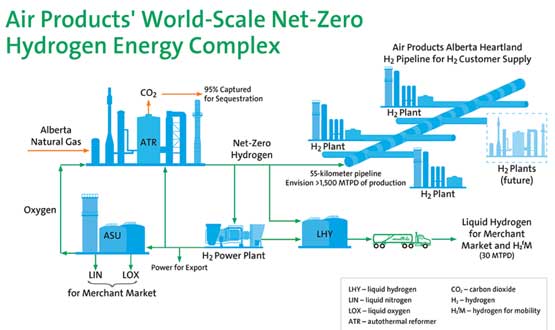 Air Products’ hydrogen business in Alberta is envisioned to reach over 1,500 tonnes of hydrogen production per day and achieve greater than three million tonnes per year of CO2 capture. Initially, Air Products will build, own, and operate a new net-zero hydrogen complex consisting of a:

The hydrogen liquefaction facility will play a critical role in the developing hydrogen economy across Western Canada. Hydrogen will help to meet society’s need for sustainable transportation, especially for heavy duty vehicles where hydrogen excels compared to other technologies. Hydrogen is seen as having a substantial technological advantage over battery electric vehicles in heavy-duty applications due to those vehicles’ duty-cycles, especially in Canada’s extreme climate conditions. Hydrogen as a transportation fuel most closely mirrors the traditional consumer transportation fuel experience, and Air Products has been a pioneer in this area for decades. The company’s technologies are used in over 1.5 million refuellings annually across 20 countries, with Air Products having been involved in over 250 projects.