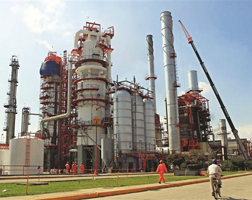 Albania is opening its doors to investments from companies interested in hydrocarbon exploration and production sector, in a block located in the southwestern part of the country. Albania’s national agency of natural resources (AKBN), has set an application deadline for November 7 2018.

According to the Albanian state-run oil firm AlbPetrol, the country has oil reserves of 220 million barrels, and the largest onshore oil field in continental Europe – The Patos-Marinza oilfield, near the southwestern city of Fier.

The exploration period is up to five years, divided in three phases, and can be extended up to seven years. In the case of a commercial discovery, the period for development and production of the area shall be 25 years and can be further extended, AKBN noted.

In February this year, Albania’s ministry of energy and infrastructure signed an oil exploration agreement with Shell Upstream Albania, a wholly-owned subsidiary of Royal Dutch Shell, for block 4 in the southern Albanian mountain of Shpirag. Shell will invest an estimated USD 42.5 million (37 million euro) over seven years in the search for new oil deposits, the ministry said at the time.