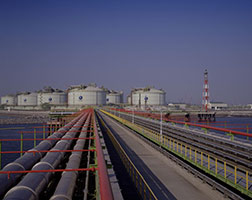 ASIA PACIFIC – An unexpected slump in South Korean demand for imported natural gas hit the Asian liquefied natural gas market in 2014, contributing to a halving in spot prices and placing doubt around some growth forecasts.

The firm found that LNG production climbed just 5 million tonnes in 2014 to 246 million tonnes a year, while trade was inflated by increased levels of re-exports.

“But the big surprise was that Asian LNG demand was much lower than expected,” said Giles Farrer, principal analyst for global LNG at the Edinburgh-based consultancy.

“Demand in emerging markets, like China, failed to grow to the extent anticipated and demand in the established South Korean market fell considerably.”

Global oil prices edged higher in recent week , with Brent crude recovering to more than $US51 a barrel, off previous Wednesday’s low of $US46.83. Prices are still down 55% from June

The stabilisation in prices brought a modest pick-up in share prices amid suggestions from some brokers and analysts that energy stocks have been over-sold on the commodity price collapse.

Santos was up 4.3% in afternoon trading in Sydney, while Beach gained 4% and Woodside Petroleum  up 2.9%.

Wood Mackenzie is typically among the more bullish of consultants on LNG demand growth, whereas others such as FACTS Global Energy take a dimmer view of expansion in consumption, citing the several alternative fuels that buyers can turn to, particularly in periods of high prices.

In Asia, the biggest regional market for LNG, imports rose only slightly in Japan, the largest single buyer, while imports into India edged up just 2% because of limitations in import capacity.

The lower demand growth helped drive a crash in LNG spot prices, which fell from a peak of over $US20 per million British thermal units on February 14 to less than $US10 $12.32) per MMBTU at Thanksgiving.

The start-up of ExxonMobil’s $US19 billion LNG plant in Papua New Guinea contributed to the price weakness by boosting supply, while output also increased in Nigeria and Algeria.

The PNG LNG venture, in which Oil Search and Santos have partners, had a “phenomenal” year, with the project reaching full capacity from both its production units within five months of its May start-up. But other new plants had problems, notably Chevron’s Angola LNG project which only started production in June 2013 but was shut again in May last year for extensive repairs.

In terms of final investment decisions for new LNG supply plants, Australia has handed over the baton to the United states, where three new export ventures were sanctioned in the second half of 2014. Australia had a wave of investment decisions for new LNG plants starting in 2009 but has not had any go-aheads since Inpex Corporation’s sanctioning of its $US34 billion Ichthys project in Darwin in January 2012.

Wood Mackenzie noted a change in the federal approvals process for US LNG export ventures last year, which it said benefited projects that were most advanced in the process, including the Magnolia terminal in Louisiana led by ASX-listed Liquefied Natural Gas Ltd.

In Asia, little new capacity was sanctioned while some projects were delayed, including Woodside Petroleum’s Browse floating LNG venture which had been targeting a decision by late 2014 to start engineering and design work.

Wood Mackenzie reported that a record number of new LNG tankers were ordered in 2015, of some 67 ships, spurred by expectations of a surge in US LNG exports based on shale gas. But the uptick in ship orders has weighed on charter rates for tankers, reflecting the number of ships ordered in the previous record year, in 2011, that have yet to secure work. South Korea’s DSME captured the bulk of the new ship orders in 2014.

Meanwhile, ExxonMobil earlier announced the naming of the first new LNG tanker custom-built for its PNG LNG venture. The ship, named “Papua”, was built by the Hudong-Zhongua Shipbuilding Group and can carry 172,000 cu m of LNG making it the largest LNG ship yet built in China. It is expected to be delivered to PNG early this year.