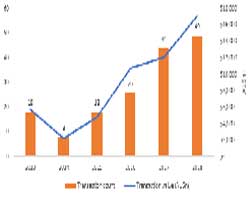 Australia’s renewable energy sector is set to boom in the year ahead and global investors are waking up to the market’s abundant opportunities. In a survey of 100 renewable energy investors from Australia and abroad, 68% say they will increase investments there in the year ahead. A further 22% say they will at least maintain current investment levels — and none are planning to decrease their spending – indicating clear confidence as the Australian renewables space grows from a nascent industry to one of global competitiveness.

These were among several key findings in research conducted by MinterEllison and M&A intelligence provider Mergermarket, released in the report “Australian renewable energy investment trends and outlook 2019”.

The report explores current market opportunities for renewable investors in Australia, ranging from those in wind and solar power to energy storage and even hydrogen. It also sheds light on the country’s more notable advantages as an investment destination with political/regulatory stability, a reputable legal system, climate/topography and greenfield opportunities topping the list, according to respondents.

“The report shows a high degree of international optimism for the Australian renewables sector, with investors in North America and Asia Pacific in particular looking to ramp up their investments in Australian renewables. This suggests that international investors continue to regard the Australian sector favourably, notwithstanding some more subdued sentiment recently expressed within the domestic market,” said Simon Scott, MinterEllison Partner and the firm’s Energy and Resources leader. “The overall deal value in the Australian sector rose significantly in 2018 to AUD$12 billion, up 41% from 2017, and we see no sign of this investment and transactions slowing.”

“We can see that amongst developed nations, Australia ranks third as having the most supportive environment for renewable financing at present, behind only Germany and the US,” said Scott.

Opinions among foreign investors in the research paint a particularly promising picture for the near term, and large percentages from North America (65%), Europe (40%) and Asia Pacific (45%) say they will increase their investments in the Australian renewables space. According to respondents, many are looking to Australia as saturation in their home markets pushes them further afield, using partnerships and strategic alliances to buy and build assets.

“A combination of factors are driving confidence in Australian renewables, with many offshore investors keen to leverage Australia’s high degree of legal certainty relative to other markets in region, and the beneficial climate and topography,” said Mr Scott. “Most Australian states have set ambitious renewable energy targets, and that helps build confidence. Victoria, for example, is seeking to generate 40% of its energy from renewables by 2025. Commitments like these from the states goes some way to bridging the certainty gap for investors.”

Various sectors stand to benefit from the uptake of renewables in Australia. Agribusiness and mining stand out for their potential to link up with renewable power developments.

“Large agribusiness see renewable energy as supportive of enhancing their ‘paddock to plate’ brand,” said Mr Scott. “Major miners and gas producers are also keen to reduce their carbon footprint across their supply chain, and see renewables as an important way to improve their green credentials.”

The United States (North America), China (Asia Pacific) and Germany (Europe) are expected to be the leading investor geographies by their respective regions. In the US, the strength of the US dollar is one likely factor behind this sentiment. Tax and trade policies in the US are also a consideration. These factors are squeezing developer margins at home, creating an incentive to look to abroad.

In China, meanwhile, there is overcapacity in the home market and last year the government began blocking new subsidised projects. This could encourage investors from these jurisdictions to look further afield, although capital controls imposed by Beijing may continue to put the brakes on Chinese investment. Respondents also say that Chinese investors have the financial firepower available and will not shy away from competing in the Australian market.

Despite this overall optimism, various barriers may challenge investor intentions. Competition for well-located greenfield projects with good access to the grid will continue. And as with any investment – cross-border or domestic – there will inevitably be roadblocks to consider before investing. This makes it even more imperative for prospective investors to have a gameplan and proper guidance in order to win deals and secure value from their transactions.

“High valuations are expected to pose the biggest obstacle to investment in Australian renewables in the next 12 months, according to 62% of respondents,” said Mr Scott. “Respondents, particularly domestic investors, also continue to highlight the need for further regulatory reform, in particular a federal carbon emissions scheme or, if that is not achievable, a strengthening of State-based measures; and improvement in the regulatory pathway to transition from a thermal system to a predominantly renewables based grid.”

In terms of investors, respondents expect renewable energy developers and funds– including specialist infrastructure funds, private equity and pension/superannuation funds – to be active in the year ahead.

“We can see some real opportunities for institutional investors, with renewables being able to provide stable, long-term returns for those with the right game plan,” said Scott.