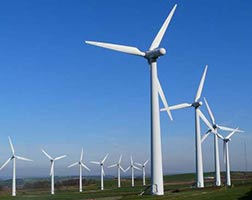 State Agency on Alternative and Renewable Energy Sources is conducting test trials on Azerbaijan’s new wind plant Yeni Yashma. The plant has a capacity to generate 50 MW and is located at the Khizi region of Azerbaijan.

“As of today, simultaneous testing of 18 of the total 20 turbines of the power plant is underway. After completion of the tests and their connection to the overall power grid, the station will start running at full capacity,” said the agency.

Wind is another alternative resource Azerbaijan is reach with following the solar energy.

The country also plans to use the windy Caspian Sea to expand its alternative energy potential. Wind farms are expected to be constructed in the offshore area that has a great wind potential.

Today, the power of the energy system of Azerbaijan is about 7.2 megawatts. The total potential of alternative and renewable energy sources in the country exceeds 12,000 megawatts. Most of the country’s capacity in this area accounts for solar energy, and this potential is estimated to stand at 5,000 megawatts.

Preliminary studies show up to 100 objects for alternative energy are planned to be constructed in Azerbaijan in five years.