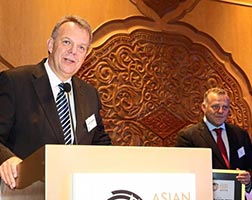 The proposed Baleh and Baram dams are ready to be built simultaneously by Sarawak Energy Bhd (SEB) in order to meet the high demand for power.

The proposed Baleh and Baram dams have an installed capacity of 1,285MW and 1,200MW, respectively. The dams will be bigger than the 944MW Murum dam, which SEB commissioned in June 2015.

They, however, are smaller than the 2,400MW Bakun dam developed by the Federal Government-owned Sarawak Hidro Sdn Bhd.

Chief Minister Tan Sri Adenan Satem had announced in May that the Government had given the green light to SEB to go ahead with the controversial Baram dam project, which has been objected to by villagers who would be displaced, and environmental groups.

Sjotveit told StarBiz that SEB had to go through the necessary approval processes, including the approvals of the project’s social and environmental impact assessment (SEIA) report by the authorities, its board of directors and the state government before it could proceed with the Baram dam’s construction work.

He expected construction work for the Baleh dam project, where no resettlement of villagers is required, in the upper Rejang Basin in central Sarawak, to commence by next year for full commissioning in 2024. Tenders for three of the project’s eight major work packages have closed and bidders are currently being evaluated.

Giving details on the power demand from Score’s energy-intensive industries recently, Sjotveit said SEB had signed 14 firm power-sale agreements with customers to supply a total of over 3,000MW.

“Once the growth in the organic or non-Score-related load is taken into account, the entire firm output of the Bakun and Murum dams, the Balingian coal-fired plant (currently under construction with an installed capacity of 600MW) and the new combined cycle power plants being developed in Kidurong (Bintulu) and Lutong (Miri) have already been committed to our customers, who are at various stages of completing their plants in Samalaju.

“The strength of the demand is such that we have not been able to find power for all the (potential) customers who wish to invest in Sarawak. The more we delay, the more investors we (will) turn away,” he said, describing the power demand as “exceptionally strong”. SEB is purchasing the entire power output from Bakun for sale to Score industries.

According to the Baram dam’s SEIA report, which is on public display, Sarawak’s total energy demand is expected to jump to 6,260MW by 2025. By then, the state’s organic growth is anticipated to reach 1,950MW, while demand from Score customers could potentially soar to 3,700MW and export customers to 430MW.

The report says to ensure network security, there is a necessity for SEB to have a reserve capacity of 600MW.

The Baram dam project in northern Sarawak is anticipated to generate 7,708Gwh of firm energy per year to support Score’s phase 2 industrial development, which will include cluster industries.

The proposed 170m high Baram dam would be a roller compacted concrete (RCC) dam. The project requires the construction of two saddle dams of a height of 80m and 20m, respectively.

“The saddle dams are required to close the small depression within the hills, south of the main dam and south-east of the saddle dam 1,” adds the report. The project’s land acquisition exercise is scheduled for completion this year.

As the project site is located on the upper reaches of the Baram River and about 130km from Miri city, a 13km long new access spur road would have to be built, while upgrading works is required for a 60km stretch of the existing logging road that services the Baram valley.

The new access road and logging road’s upgrading works are slated to start this year.

The report said the Baram dam power house would be connected to the SEB Bunut substation via a 71km long double-circuit 500kV transmission line, and hooked up to the state power transmission grid.

“The majority of the villagers agree in principle on the concept of resettlement based on the dialogues and resettlement discussions carried out under the purview of the state government.

“The state government has a process in place that requires a comprehensive and detailed study, with feedback and consultation involving the affected communities, the project proponents and relevant agencies, to come up with a resettlement action plan to be agreed by the stakeholders,” said Sjotveit