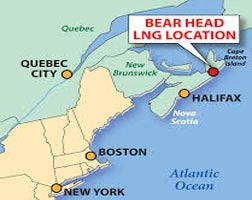 Liquefied Natural Gas Limited wishes to announce that its wholly owned subsidiary, Bear Head LNG Corporation (Bear Head LNG) has been advised by the Canadian Environment Assessment Agency that it has reviewed the additional Bear Head LNG Project information and concluded that:

(1) the design for the proposed project will be substantially the same asthat which was previously submitted and approved under the Canadian Environmental Assessment Act (CEAA);

(2) since some construction of the LNG facility has already taken place, the Canadian Environmental Assessment Act, 2012 (CEAA 2012) does not apply to the LNG component of the project; and

(3) the proposed installed gas‐fired power generation is not considered to trigger CEAA 2012 since the project will not use natural gas to generate electricity.