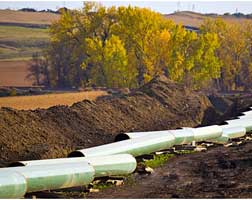 Canada’s Federal Natural Resources Minister Jim Carr says the government has moved on to a whole different plan for its oil exports, eyeing Asian markets rather than just relying on its one major market, the US.

Ahead of the promised approval by US president-elect Donald Trump for Trans Canada’s Keystone XL pipeline project that would carry more than 800,000 thousand barrels of oil a day from Alberta to refineries in Texas, it looks like the once crucial Keystone XL pipeline has now become less of a priority. President Barack Obama rejected the pipeline’s proposed construction last year.

“It doesn’t get oil to export markets in Asia,” said Carr. “It’s a goal of the government of Canada to expand its export markets.”

Almost all of Canada’s oil is currently being exported to the US. Pipelines that carry oil from Canada are at capacity, so a lot of it is going by rail. Canadian oil also faces a significant discount in US Midwest refineries because it’s heavier and more expensive to refine than light crude.

Carr said his government wants to take a new approach.

“I think that if you listen to what the prime minister has said about moving our resources sustainably, the importance of responding to the demands in other export markets, and not to solely rely on one major market,” he said. “That is the sensible approach to take and nothing has changed.”

Jennifer Winter, scientific director of energy and environmental policy at the University of Calgary in Alberta, thinks the priority for the Canadian government now is focusing on pipeline projects on its own soil and the markets it wants.

During question period in the House of Commons earlier this week, Carr said that as far as Canada is concerned, Keystone XL has been approved and is ready to go on the Canadian side of the border. If the pipeline is to be built, Carr said, the company has to reapply for permission from the US government.

The Canadian government is also still considering two pipeline proposals. It must provide a decision on the proposed Trans Mountain pipeline expansion that would carry oil from Edmonton to Burnaby, British Columbia.

It also has to figure out what to do about the troubled Northern Gateway pipeline project that would carry oil from Alberta to Kitimat, British Columbia for export to Asia.

That pipeline is in limbo after a court overturned federal approval of the project. The federal cabinet has to decide by the end of November whether to undertake more consultations with indigenous communities or scrap the whole thing.

Meanwhile, the prospect of the revival of the Keystone XL pipeline isn’t a slam dunk either, according to Jeff Phillips, who specializes in international trade and U.S.-Canada relations with Dawson Strategic in Ottawa.

Phillips predicts Trump’s campaign promises to approve Keystone XL may come up against the reality of the controversial project.”He also had a big caveat to that, which is he would want America to have a bigger share of the pie, and we don’t know what that means,” he said.