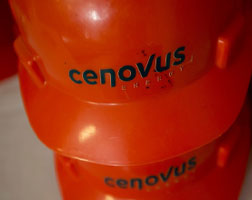 One of Canada’s largest oilsands producers, Cenovus increased its oils and output by 20 % from a year earlier to 144,000 barrels a day.

Conventional oil production decreased by four %, while natural gas production was down three %.

Cash flow declined by 45 % in the last year to US$495 million for the quarter, the company said.

But Cenovus said it has decreased its production costs across the board and raised US$1.4 billion on markets to increase its financial resilience.

Cenovus said Wednesday it expects to increase production by 100,000 barrels a day by 2016, despite continued low prices.

“I think there’s continuing risk here in the second quarter, because the of the potential for storage congestion, that we might see even weaker prices,” Brian Ferguson said in an interview.

In North America, oil is being stored in tanks in the hopes that it will sell at a better price down the road. There have been concerns that as those tanks fill up, prices could deteriorate.

“One of the things we’re very closely monitoring is supply and we’ve seen clearly a big drop in the rig count,” said Ferguson. “That has not translated to a drop in supply yet in the U.S. I think we’ll have more information, a clearer view in the direction of oil prices perhaps in the third quarter.”