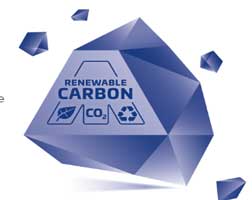 For years, the chemical industry has been successfully reducing the carbon footprint of their products by increasing efficiency and utilising renewable energy. The next phase towards a sustainable future begins by paying attention to the fossil carbon embedded in products, as it also contributes to the greenhouse effect once these products reach their end-of-life. The potential solution is the utilisation of the three available, alternative carbon sources biomass, direct CO2 utilisation, and recycling for products containing carbon. Summarised under the term “renewable carbon” these sources are the future of the organic chemistry and further downstream products such as plastic products.

“What is the share of the different carbon sources in the total carbon use in your European production?”

The results of the survey clustered chemical companies by their branch and share of renewable carbon into the following four groups:

While the survey data allows some first insights, they are not sufficient to make statements about the average use of renewable carbon in the chemical industry. Instead, such information can be derived from Eurostat data, for which nova-Institute provides annual updates to the Bio-based Industries Consortium (BIC). The latest report that will be published in September 2020, found “an overall slight but steady increase in the bio-based share of the organic chemical industry in the EU-28 from about 10.7% in 2008 to 14.9% in 2017” .

To shift the chemical industry entirely to renewable carbon, the utilisation of recycled feedstock as well as CO2-utilisation have to be ramped up and implemented widespread. nova-Institute and COWI estimate that the current average renewable carbon share in the European chemical and plastic industry lies between 20 and 25% – 15% from biomass and 5-10% from recycling.

These numbers are in line with the findings of the survey. While the 50 biggest players in the industry showing a lower than average share, there are hundreds of smaller chemical companies having higher shares of renewable carbon.