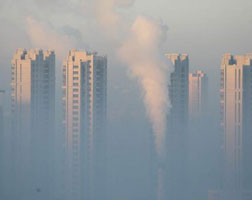 As one of the largest polluter of emissions in the world and with declining air quality in the country, China has unveiled further details of its three-year environmental plan, reiterating its goal to reduce coal consumption and listing the cities where it’s targeting steel capacity curbs.

Policy makers will promote natural gas use over coal in areas battling severe air pollution in the Beijing-Tianjin-Hebei region as well as Fenhe and Weihe river plains, according to three-year plan published by the State Council

The target to cut coal use by 10% through 2020 compared with 2015 levels was reported recently by the official Xinhua news agency.

The plan reiterated the goal for natural gas to account for 10% of total energy consumption by 2020 and for coal to fall below 58%.

The State Council will also ban the building of steel, aluminium and cement capacity in the same regions as the coal curbs in addition to the Yangtze delta region. Those restrictions were also reported by state media but the State Council has recently identified the specific cities affected including major steel-producing centres of Tangshan and Shijiazhuang.

Other details from the latest plan include: