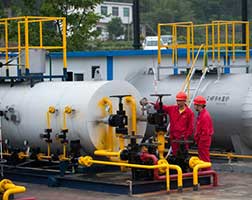 BEIJING – As China struggles to meet its goals for shale gas development, there are signs that the government will face pressure to subsidize the costs, perhaps for years.

But 1.14 bcm, or nearly 90 % of the gas, came from a single field, the Fuling block in southwestern Chongqing municipality, under development by state-owned China Petroleum & Chemical Corp (Sinopec).

Shale is just a small fraction of China’s gas output, although its potential could make it the fastest-growing segment of the industry.

So far, the government has continued the push that it mounted for the new technology after the U.S. Energy Information Administration initially estimated in 2011 that China’s technically recoverable shale gas resources of 1,275 cubic feet (36 trillion cubic meters) were the largest in the world.

China has looked to shale as a key domestic resource for the future as it seeks to reduce reliance on high-polluting coal and promote cleaner-burning gas.

But the country’s complex geology, water scarcity and high production costs in remote locations have made it hard to duplicate the U.S. shale boom that has driven down energy prices over the past four years.

Last July, the MLR said that 20 billion yuan (US$3.2 billion) had been invested in 54 shale exploration projects for the mostly modest returns.

In August, the National Energy Administration (NEA) sharply scaled back its 2020 target for shale production from 60-100 bcm to 30 bcm, while leaving its 2015 goal of 6.5 bcm intact.

Producers may have a good chance of coming close to the 2015 target, since Sinopec expects to raise output capacity to 5 bcm this year and 10 bcm in 2017, according to Reuters.

CNPC PetroChina has voiced confidence that it will fulfill plans to produce 2.6 bcm this year at fields in southern Sichuan province, Bloomberg News reported in October.

Despite the projections, CNPC’s Economics and Technology Research Institute estimated last week that China would produce only 3.5 bcm of shale gas this year, missing the 2015 target, Russia’s Interfax reported.

The report did not explain the disagreement with earlier corporate forecasts.

Could be a stretch

But even the government’s reduced goal for 2020 may be a stretch unless other commercial resources are found soon.

In another report last month, it was stated that officials have been unable to identify enough shale blocks to hold a third round of auctions since previous licenses were sold in 2012.

Falling energy prices and a slower-growing economy are expected to have an eventual effect on the profitability of producing high-priced shale fuel.

“If oil prices remain at U.S. $60 (per barrel) for the next few years, then achieving 10 bcm will be a challenge,” said Gordon Kwan, head of Asia energy research at Nomura International Hong Kong Ltd., as quoted by Reuters.

Benchmark crude has been trading well below that for nearly two months.

In the recent update to its World Economic Outlook, the International Monetary Fund projected that per-barrel world oil prices would average US$56.73 this year, rising to US$63.88 in 2016.

China’s benchmark coal prices also remain at low levels of about 520 yuan (US$83.65) per ton, down by double-digits in the past year, making even conventional gas a tough sell without administrative incentives.

But even with more flexible pricing, gas-fired power rates would be capped at no more than 0.35 yuan (US$ 6 cents) per kilowatt-hour over coal-fired power costs.

But both the price level and the subsidy face uncertainties.

It is unclear whether the subsidy will be extended past 2015, said Jiao Fangzheng, Sinopec senior vice president, according to Reuters.

Falling energy prices and economic growth may also force the government to cut rates in order to meet its goals for expanding gas use.

China’s government-set tariffs and reliance on imports have challenged profitability in the gas sector, despite prospects for growth.

CNPC estimates that China will produce 138.5 bcm this year with consumption of 230 bcm, leaving a gap of 91.5 bcm for imports, China Daily said.

In the past, state-owned companies have offset such losses either with profits from their monopoly in the oil business or government payments of retroactive subsidies.

The government paid large retroactive subsidies to refiners for years to cover losses from forced sales of fuel at fixed rates before partial pricing reforms.

With the dramatic drop in oil prices, profits from oil and fuel may now be threatened, putting a greater focus on subsidies, particularly for capital-intensive ventures like shale gas development.

“Any lowering of producer prices for gas would reduce the economic incentives for companies to explore for shale gas, or indeed, any form of gas,” Andrews-Speed said.

But the government may be forced to cut end-user gas prices to maintain consumption growth and any semblance of competition with cheaper energy sources.

If it does, the government could create a “single buyer” to absorb the losses, which would then be covered, or it could pressure the state oil companies to keep exploring despite lower prices and higher losses, said Andrews-Speed.

The government would then have to decide whether to pay annual subsidies or increased payments for shale and CBM production, he said.

Either way, lower energy prices may mean that China’s shale gas goals will only be met at a high cost.