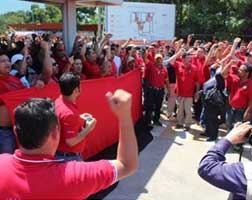 Workers at ArcelorMittal – Kazakhstan’s biggest steel mill – has expanded their strike to all of the firm’s coal mines, demanding a 100 % wage rise.

ArcelorMittal Temirtau said it was in talks with the miners. It did not say how the strike could affect its output.

“The work of (the) grievance committee is in progress,” the company said in a statement.

The protest started on Monday when miners refused to leave four of the company’s eight mines. On Tuesday, the firm said all eight mines had stopped producing coal.

The company, which produced about 4 million tonnes of steel last year, said in September it was negotiating a new collective agreement with steelworker and miner trade unions and planned to sign it before the end of the year.

Large-scale industrial action is rare in Kazakhstan whose government, according to international human rights groups, has cracked down on independent trade unions.