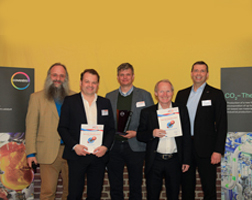 Three companies from Canada, Norway and Germany were recently awarded a new innovation prize for these groundbreaking ideas from German research firm nova-Institut. The prize is sponsored by German materials manufacturer Covestro, itself working on the research and practical use of carbon dioxide as a raw material.

In the run-up there had been 20 submissions for the “Best CO2 Utilisation 2019” prize, which the nova-Institut is awarding for the first time. The recycling of carbon dioxide plays a central role here. Every idea has the claim of being able to be implemented industrially in the long term. This shows how important the topic has become in the meantime and how active numerous companies have already become in this field, according to Michael Carus, CEO of the nova-Institut.

“CO2 is increasingly seen from different angles, namely as a valuable raw material,” emphasized Covestro CEO Dr. Markus Steilemann, who chose the three winners. “This will enable the chemical industry to make its production more sustainable, to replace fossil resources such as crude oil and to drive forward the circular-flow economy.”

First prize went to Canadian company Carbicrete, which developed a technology to produce cement-free concrete. Cement is replaced with ground steel slag and the concrete is cured with CO2 instead of heat and steam. The new product is more cost-efficient, has better properties and is more sustainable than cement-based concrete.

Nordic Blue Crude, a company from Norway, was in second place. It succeeded in producing synthetic crude from CO2 as well as renewable power and water. The crude is usable as diesel or kerosene and can be refined to gasoline.

In third place was b.fab from Germany, which was honoured for a process technology to efficiently convert CO2, water and renewable energy into value-added chemicals such as lactic acid.

Covestro has itself developed a technology with scientific partners to use CO2 in plastics production. The company already produces chemical components (polyols) for foam and binders used in mattresses and sports floors. Numerous other applications are under development.