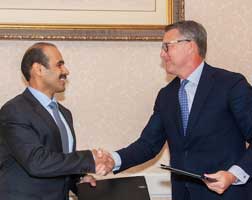 CP Chemical will be the majority owner with a 51% share and Qatar Petroleum will take up 49% of the project. The American company will provide project management and oversight and be responsible for the operation and management of the facility. The preliminary cost of USGC II is approximately US$8 billion. A final investment decision (FID) is expected by 2021, followed by full funding and the award of engineering, procurement and construction (EPC) contracts, with targeted start-up of the new facility in 2024.

The site’s location would be in the Gulf Coast region, where there is direct access to the significant shale natural gas liquid reserves of the Permian Basin.

Last month, the two companies also agreed to pursue a joint venture development of a petrochemicals complex at the Ras Laffan Industrial City in Qatar to produce ethylene and HDPE.