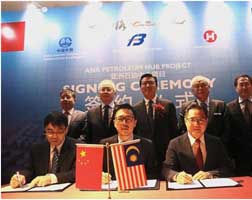 China Railway Engineering Corporation (CREC) has been awarded the engineering, procurement and construction (EPC) contract to build the oil terminal of the just-revived Asia Petroleum Hub (APH) in Johor, Malaysia.

Smart Crest Sdn Bhd, which has an oil terminal at Westport, signed a framework agreement to award the contract to CREC.

“We have not defined the percentage of the joint venture yet, because the project is already 60% completed when I took over, so we are not sure how much local content is left,” Lim said, speaking to Malaysian media after the memorandum of understanding (MoU) signing ceremony witnessed by Transport Minister Datuk Seri Liow Tiong Lai and Minister in the Prime Minister’s Department Datuk Seri Dr. Wee Ka Siong.

Lim said CREC would be responsible for the construction of the terminal on a turnkey basis.

Asia Petroleum Hub Sdn Bhd was set up in 2005 to undertake the development and operation of an integrated oil terminal facility on a 40.4-hectare reclaimed land at Tanjung Bin, off the Port of Tanjung Pelepas in Johor.

The project, launched in 2007 with financing from CIMB, was stalled in 2010 after it ran into financial difficulties.

Lim said Smart Crest bought it over from CIMB last year. He also added that construction of the oil terminal is expected to begin in the third quarter of this year, and is likely to be completed within 18 and 24 months.

The APH would provide trans-shipment and storage facilities, and serve as a strategic hub to break-bulk, make-bulk, blend and redistribute petroleum products to domestic and regional markets.

The MoU came several days after the Bandar Malaysia deal collapsed, which saw CREC and its local partner Iskandar Waterfront Holdings Sdn Bhd dropped as the master developer. But Lim said his group has confidence in CREC to complete the APH, a private project.

“We have engaged CREC for one-and-a-half years and we have seen their work ethic and their enthusiasm towards the project,” he said. “CREC is choosy about their projects. They always prefer projects that are strategic and have potential. That is why we work with them,” Lim further explained.

CREC deputy general manager Sun Heng said the APH would address the market needs in Southeast Asia, a region with a busy and important maritime route.

Liow, meanwhile, said Malaysia still has much room for improvement in the sector of oil terminal, while Singapore is already saturated.

“Malaysia and Singapore can complement each other,” he said.

Liow said before the signing: “This APH, once completed, can complement the busy ports of Singapore and promote the growth of other downstream industries, which further elevate the APH as a true petroleum hub in Asia.”