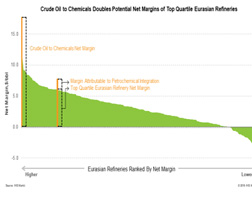 A revolutionary new chemical process technology, called crude oil-to-chemicals (COTC), could more than double the profitability derived from a barrel of crude oil, according to a new, independent economic assessment from IHS Markit.

Currently, global, integrated refining/petrochemical companies typically earn about US$8.50 per barrel of refined crude oil*, but by leveraging the new COTC process technology (based on a Saudi Aramco Technologies COTC design**) in a world-scale refining and chemical facility***, owners could increase their plant net margins to approximately US$17 per barrel, according to findings published in the IHS Markit Process Economics Program scenario analysis: Crude Oil to Chemicals and Oxidative Coupling of Methane: Potential for Synergy? 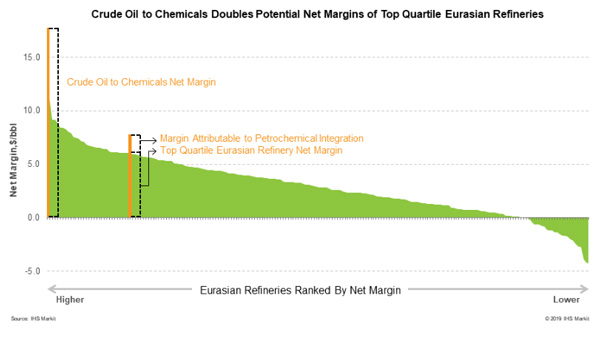 “This innovative new COTC-process technology is still in its infancy, but, according to our independent analysis, if commercially proven and built to world-scale, it has the potential to more than double the value refiners can unlock from a barrel of oil,” said Don Bari, vice president of chemical technology at IHS Markit, and an author of the report along with Michael Arné, executive director, emerging technologies research, at IHS Markit. “This process is both transformative in terms of its potential, and timely, as refiners face declining future demand for gasoline and fuel production due to carbon emission mandates, greater vehicle fuel efficiency, and an increasing penetration of electric vehicles,” Bari said.

Global chemicals demand is growing at a significantly higher rate than fuel demand, Bari said, so the desire to produce higher-value chemicals from lower-value feedstocks like crude and ethane is driving tremendous interest in these disruptive technologies. One of the most significantly disruptive technologies or categories of technologies being developed, based on their sheer volume, is crude oil-to-chemicals, Bari said. These projects fuse a refinery and petrochemical plant together in a fundamentally new way.

“This goes well beyond the state-of-the-art refinery petrochemical integration by implementing new reconfigured unit operations into a refinery,” Bari said. “The objective is to shift the product slate derived from a barrel of oil to a range of 60% to 80% chemical production and non-fuel products, up from the traditional range of 10% to 15% or so, in order to significantly increase the value of crude oil reserves and provide demand security in Aramco’s case. This transformative COTC technology goes beyond even the most “highly” integrated sites today that are pushing 30% to 40% chemicals production with traditional approaches,” Bari said.

Bari said the IHS Markit chemical process research team was motivated to embark on a deeper analysis of the economic potential of the COTC technology following the 2018 announcement by Siluria Technologies (a technology provider that produces olefins directly from natural gas) that it had joined forces with Saudi Aramco Technologies.

“One of the reasons these crude oil to chemicals technologies are of such great interest is because they are potentially so disruptive to the industry’s current processes and capabilities,” Arné said. “This is due, largely, to the scale involved and what it will deliver in terms of volumes. In time, COTC could literally disrupt the global chemical balance. For that reason, everyone in the industry is interested in this technology—energy producers, refiners, chemical producers, technology providers, and, of course, investors,” Arné said.

Arné said COTC becomes even more intriguing when you consider Saudi Aramco’s recent announcement that it had acquired a 70% controlling stake in Sabic (Saudi Basic Industries Company, the chemical arm of Saudi Arabia). The deal combines Saudi Aramco, by far the world’s largest oil producer by volume (in 2018, it produced 13.6 million barrels per day of crude and condensate), with Sabic, the world’s fifth-largest chemical company by sales (Sabic revenues in 2018 were US$45.1 billion) according to IHS Chemical Week.

Ahmad Al Khowaiter, chief technology officer of Saudi Aramco has publicly stated that “maximising the output of high-value chemicals products from our future crude-oil processing projects is one of the key objectives in our downstream technology strategy.” The Sabic acquisition moves Saudi Aramco “a step closer to achieving its long-held ambition of becoming the world’s leading integrated energy and chemicals producer,” according to the IHS Chemical Week report on the deal, enabling the company to build on a solid platform to support Aramco’s continued investment in petrochemicals—the fastest growing sector of oil demand. In addition to the Sabic deal, Aramco has committed US$100 billion to invest in petrochemicals through 2030.

In its current analysis of the COTC technologies, IHS Markit assessed just the potential economics of the Aramco COTC process because of its near-term viability at scale. The Siluria process is still too early in its development for IHS Markit to model economics, Bari said. The IHS Markit assessment, however, did take the OCM process into consideration for purposes of discussing increased yields through integration.

“The IHS Markit COTC process concept illustrates why so many companies are interested in this technology,” Bari said. “Our base case shows a 48% yield to prime olefins,” Bari said. “On a third-quarter 2018 Saudi basis, the refinery margin is $17/barrel EBITDA and US$12/barrel EBIT  for a high performing (though small) refinery of 200,000 barrels per day, compared with US$7/barrel to US$10/barrel EBITDA for top-quartile Euroasia refineries.”

“The results of the analysis significantly exceeded what we initially expected—it was one of those ‘wow’ moments as a researcher and chemical engineer, when you have to run the numbers again to believe what your eyes are seeing,” Bari said. “While the technology is still new, in my 40 years in the industry, I haven’t witnessed any technology that has the potential to unlock such value and truly revolutionize the refining and chemical industries as this COTC technology. At the same time, it does so in a manner that is less carbon intensive.”

According to the IHS Markit analysis, the COTC process affords the refiner/petrochemical producer sustainability gains through the reduction in the overall carbon footprint of a facility due to integration and optimization of assets, which become more efficient.