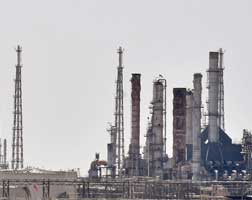 Drone attacks by rebels on Saudi Arabian oil/gas company Saudi Aramco facilities have caused fluctuations to output and exports, with more than 5 million barrels a day of crude production impacted, which is close to 5% of global oil supply. Oil prices also surged up to 20% on worries over global supply and soaring tensions in the Middle East, the highest since the 1980s.

Meanwhile, US President Donald Trump said the US is ready to retaliate, after a senior official in his administration said Iran was to blame. Iranian Foreign Ministry spokesman Abbas Mousavi dismissed the US allegation it was responsible as “pointless.”

Traders and analysts said crude may spike to as high as US$100 a barrel if Riyadh fails to quickly bring back supply. Riyadh said it would compensate for the damage at its facilities by drawing on its stocks while Trump said he had also authorised the use of the US emergency oil stockpile.

The fires in facilities in Abqaiq and Khurais have been brought under control, according to recent reports, but the Yemeni rebels have threatened to widen the range of their attacks on Saudi Arabia, which leads a military coalition battling them in neighbouring Yemen.

Saudi Aramco’s Abqaiq oil processing facility, some 60 km southwest of Dhahran in the Eastern Province is said to be the largest crude oil stabilisation plant in the world.

The facility processes sour crude oil into sweet crude, then transports it to transhipment points on the Gulf and the Red Sea.

The Khurais complex is located about 160 km from the capital Riyadh. It has estimated reserves of more than 20 billion barrels of oil, according to Aramco.