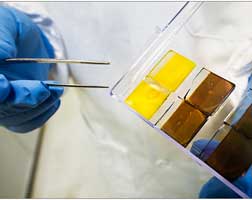 An emerging technology that can be used to harvest sunlight when turned into a crystalline structure could be the key to making spray-on solar cells a reality at prices potentially far cheaper than today’s silicon-based panels.

Solar researchers and company executives hope that perovskites, which can be mixed into liquid solutions and deposited on a range of surfaces, could play a crucial role in the expansion of solar energy applications with cells as efficient as those made with silicon. One British company aims to have a thin-film perovskite solar cell commercially available by the end of next year.

“This is the front-runner of low-cost solar cell technologies,” said Hiroshi Segawa, a professor at the University of Tokyo who is leading a five-year project funded by the Japanese government that groups together universities and companies, such as Panasonic Corp and Fujifilm Corp, to develop perovskite technology.

Even though not everyone is sold on perovskite as a game-changer from the industry’s heavy reliance on silicon photovoltaic cells, recent research pointing to the material’s potential continues to grip the solar energy research community.

The World Economic Forum picked the material as one of its top 10 emerging technologies of last year. Meanwhile, solar panel makers and top universities in Europe, the US and Asia are racing to commercialize the technology, with researchers churning out as many as 1,500 papers a year on the material.

Perovskite’s usefulness was first hinted at in 2006 when Tsutomu Miyasaka, a professor at Toin University of Yokohama in Japan, was approached by a graduate student interested in testing how well the material could convert sunlight to electricity.

Though he had been testing a number of different materials for solar panels, the Japanese academic had never heard of the synthesized crystal, Miyasaka said in an interview.

The idea to use perovskite, which is based on the same structure as a mineral named after Russian mineralogist Lev Perovski, initially went nowhere. Its structure was poorly understood and the industry had already latched on to silicon as the best material to convert sunlight into electricity.

Silicon solar cells have been around since the early days of the space program and now dominate the industry, with global shipments of solar products expected to have totaled US$42 billion last year, according to market researcher IHS Markit.

However, they have limitations. For one, tremendous amounts of energy are needed to produce the silicon in solar cells.

Things began to change for perovskite with the first publication of research on the material by Miyasaka’s group in the Journal of the American Chemical Society in 2009.

“We had been turned down by magazines like Nature and Science and I suspect that’s because it was low in efficiency and also the material was unheard of,” Miyasaka said. “We talked about perovskite on many occasions, but there was no feedback. Ninety-nine percent of people didn’t understand the structure of perovskite and they decided to ignore it.”

Since then, the buzz has grown, thanks to research showing perovskite can convert sunlight more efficiently than initially thought. The big breakthrough came in 2012 when the material’s conversion efficiency — the portion of sunlight that can be converted into electricity — rose above 10% for the first time.

Passing that threshold attracted the attention of researchers toiling away on different types of solar cells that were then yielding lower efficiency, according to Martin Green, a professor at the University of New South Wales who also studies perovskite.

The efficiency of perovskite cells has improved further — exceeding 20 percent in the lab — to reach a level that took silicon cells years to achieve.

Though conventional solar cells are still more efficient at about 25%, they have been stuck at that level for about 15 years, according to the World Economic Forum.

However, challenges remain. For one, researchers must still come up with a way to ensure the material remains stable outdoors for long periods of time.

Methods for painting the material on large surfaces must also be improved, said Masanori Iida, an official at the technology and design sector at Panasonic. “It is difficult to continuously make the coating even,” Iida said.

Others are more cautious about the commercial viability of the new solar technology. “It certainly is going to be more than five years and it could be never,” Green said, referring to how soon perovskite solar cells will be commercially available.