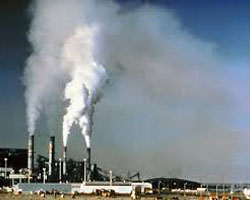 Private and state-owned energy companies own reserves of fuel containing more than 3,200 gigatonnes of carbon dioxide – nearly five times the amount that can be burned if the global temperature is to be kept to within safe levels, according to a report.

The World Bank and Bank of England have warned that the need to tackle climate change could render some fossil fuels worthless – potentially costing investors trillions of dollars.

The top 200 private coal, oil and gas firms currently own fuel reserves containing 555 gigatonnes of carbon dioxide, which is close to the maximum amount that scientists believe can be emitted into the atmosphere while still keeping the rise in average temperature to 2 degrees Celsius above pre-industrial levels, The Guardian reported. The carbon in privately owned reserves has gone up by 10 % in the last five years.

Stuart Braman, chief executive of Fossil Free Indexes (FFI), a US firm that produced the figures, said: “While the world’s carbon budget goes down every year, as more and more carbon dioxide is spewed into the atmosphere, the potential emissions [of the 200 companies] are going up.”

Mr Braman said the 200 firms owned more 97 % of the carbon held by publicly traded companies and could be used as a guide for those joining the growing movement to divest from fossil fuels.

“Many, many things are needed to get to a low-carbon world, but one of those things is keeping fossil fuels in the ground,” he said.

“The lists show that fossil fuel energy investment decisions are actually concentrated in a small number of companies,” he said.

“Determining where this capital is spent needs to be an important issue for investors, otherwise there is going to be a lot of capital wasted in coming years on developing fossil fuel reserves that cannot be burned.” – The Independent