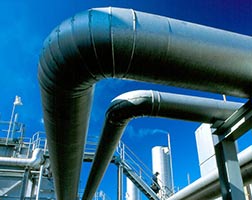 Meanwhile, the profits of its affiliate Energy Transfer Partners LP rose 39% in the latest quarter.

Investors likely will be scrutinizing the conference call for any signals regarding ETE’s efforts to acquire rival pipeline operator Williams Cos. in a multibillion tie-up that would give ETE a vastly expanded footprint.

Companies that own pipelines and other energy infrastructure have been somewhat insulated from the dramatic drop in the price of oil and gas over the past year. That is because they tend to operate based on fixed-fee, long-term contracts that pay the same amount of money whether energy prices are high or low.

Pipeline operator ETP reported a profit of $654 million, up from $471 million a year earlier. On a per-unit basis, which reflects general partner and other interests, the company’s earnings fell to 67 cents to 92 cents.