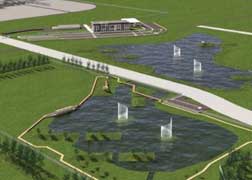 US chemical firm ExxonMobil and Riyadh-headquartered Sabic have received final environmental regulatory approval to proceed with the construction of their 50:50 joint venture project in San Patricio County, Texas. Known as the Gulf Coast Growth Ventures, the US$20 billion project will include one of the world’s largest ethane crackers, designed to produce 1.8 million tonnes/year of ethylene, two PE units and an ethylene glycol plant. The economic output is to exceed US$22 billion during construction and US$50 billion during first six years, say the firms.

Construction will begin in the third quarter of 2019 and start-up is anticipated by 2022.

“Building the world’s largest steam cracker, with state-of-the-art technology, on the doorstep of rapidly growing Permian production gives this project significant scale and feedstock advantages,” said Darren W. Woods, Chairman/CEO of ExxonMobil. “It is one of several key projects that provide the foundation for significantly increasing the company’s earnings potential.”

“Sabic is very pleased to move forward on this third joint venture with ExxonMobil – the first to be operated outside of Saudi Arabia,” said Sabic Vice Chairman/CEO Yousef Al-Benyan. “This project will not only increase global diversification for our company, but will also continue to create value within our new home of San Patricio County through creating jobs and supporting economic growth. With this project, we look forward to further building our business presence in the U.S. and serving the communities and customers in the North and South American markets even more effectively.”

The facility will produce materials used in the manufacturing of various consumer products including automotive coolants, packaging, agricultural film and building, construction materials and clothing.

Gulf Coast Growth Ventures is a unique opportunity created by the abundance of low cost U.S. natural gas, and is part of ExxonMobil’s Growing the Gulf initiative initiative, which outlined plans to build and expand manufacturing facilities along the U.S. Gulf Coast, creating more than 45,000 high-paying jobs across the region.

The project is part of Sabic’s growth strategy to build new petrochemical facilities in key markets, including the Americas, to address industry demand and achieve the company’s 2025 strategy.

Ownership interests in the Gulf Coast Growth Ventures project is 50% ExxonMobil and 50% Sabic, with ExxonMobil as site operator. ExxonMobil and Sabic bring expertise to this project, having worked together in petrochemical ventures for more than 35 years. This is the third joint venture Sabic has undertaken with ExxonMobil and its first outside of Saudi Arabia, according to the companies.

Sabic is in the process of being acquired by Saudi Aramco, which has its own major investment plans in the US via its wholly-owned subsidiary, Motiva Enterprises at Port Arthur, Texas.