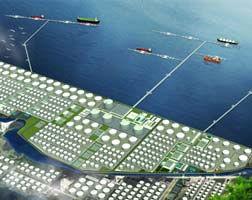 The launch of the facility comes at a time when global oil prices have lost over half their value since mid-2014 due to an oil glut, which is seeing oil producers and traders put surplus crude into storage.

Large surpluses of a commodity tend to be bearish for prices, as it takes longer for the market to process the supply available.

Earlier in the day, the oil-storage terminal at Pengerang in Malaysia’s Johor province received its first shipment of around 2.3 million barrels of Middle Eastern crude on board the Liberia-flagged oil tanker MT Mesdar.

The terminal was built by Pengerang Independent Terminals SdnBhd, a joint venture between Malaysia’s Dialog Group Bhd, Netherlands’s Royal Vopak,  and the State Government of Johor.

The Pengerang terminal is unique because crude-oil storage is typically constructed near where oil is produced, like an oilfield, or where it is consumed at the refinery. While Pengerang is the proposed site for a future oil refinery, it will be several years before one is built.

“Crude normally is an A-to-B transaction,” Singapore-based energy consultant Ong Eng Tong said. He said it doesn’t make sense for crude to be stored halfway from being produced to the point of consumption as extra expense is involved.

Royal Vopak said the crude-storage terminal in Malaysia will be the first to offer customers facilities to redistribute large crude deliveries and consolidate crude supply from regional oilfields.

Singapore-based traders said two customers who have leased storage tanks at the new Malaysia facility so far are BP PLC and Total.

“We are optimistic about the long-term developments in the oil-storage market in the region, which is fuelled by demand from fast-growing Asian economies and the growing imbalances between production and consumption areas,” said a spokeswoman for Royal Vopak, the world’s largest oil-storage company.