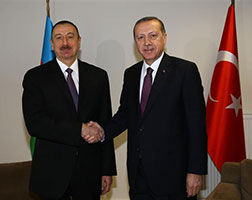 Turkey made the groundbreaking ceremony for the US$10 billion Trans Anatolian Natural Gas Project (TANAP) project to pipe Azeri gas to Western markets on March 17, in line with a plan which could help the EU reduce its dependence on Russian energy even as Moscow touts its own alternative.

The groundbreaking ceremony was kicked off for the TANAP project with the participation of Azerbaijani President Ilham Aliyev, Georgian President Giorgi Margvelashvili and Turkish President Recep Tayyip Erdoğan in the eastern province of Kars.

The initial capacity of TANAP is expected to be 16 billion cubic meters (bcm) of gas from Azerbaijan’s Shah Deniz II field in the Caspian Sea, one of the world’s largest gas fields developed by a BP-led consortium per year, and will be gradually increased to 31 bcm. Around 6 bcm of gas will be delivered to Turkey, while the remainder will be supplied to Europe.

The gas will arrive in Turkey by 2018, and after the construction of the Trans Adriatic Pipeline (TAP) it will reach Europe by early 2020. By 2023, TANAP’s capacity will rise to 23 bcm per year and then to 31 bcm by 2026, according to project executives.

Ankara raised its stake in the project to 30 % last year. Azeri state-oil firm SOCAR holds 58 %, while BP has the remaining 12 %.

“We plan to establish Turkey as the energy distribution hub of the region,” President Tayyip Erdogan said at the groundbreaking ceremony.

“TANAP has a special importance because of its route and its goal. It is not an alternative project to others; there is no alternative to it,” Erdoğan said.

“TANAP has faced many political and economic obstacles throughout its development, however Turkey will always fully support the project,” Energy Minister Taner Yıldız said, in a speech last week.

The project was announced on Nov. 17, 2011 at the Third Black Sea Energy and Economic Forum in Istanbul. In December 2011, Turkey and Azerbaijan signed a memorandum of understanding establishing a consortium to build and operate the pipeline.

In spring 2012, the process of conducting the technical-economic feasibility study was launched. In June 2012, Aliyev and Erdoğan, who was prime minister at the time, signed a binding intergovernmental agreement on the pipeline.

In November 2014, Turkmenistan signed an outline deal with Turkey to supply gas to a new pipeline that could help Europe reduce its dependence on Russian gas imports.

Ankara and Baku also struck a so-called framework agreement on for Turkmenistan, which is keen to diversify exports of its gas to world markets.