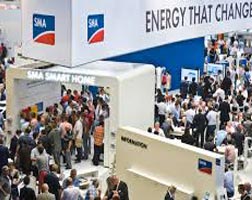 BUSINESSFRANCE, the national agency supporting the international development of the French economy, will present leaders in the photovoltaic sector on the French Pavilion at the Intersolar 2015 trade show, which will take place in Munich (Germany), from 10 to 12 June 2015.

These French-based companies will showcase their solar-energy technology and industry know-how at Intersolar, the worldwide solar power exhibition and are looking to meet new business partners.

The French Pavilion at Intersolar 2015 is being organized by BUSINESS FRANCE, in partnership with the Club Ademe International. The French pavilion, which consists of approximately 90 m² devoted to solar power, will take place from 10 to 12 June of this year, in Munich (in southern Germany).

The 2013-2017 Global Market Outlook report, published by the European Photovoltaic Industry Association (EPIA), states that solar energy now accounts for a worldwide output in excess of 100,000 MW. In Germany, solar energy accounted for 4.7% of overall electricity production in 2013. In France, the existing solar-power capacity connected to the grid stood at an overall total of 4.47 GW in late 2013, ranking the country third in Europe and sixth worldwide.

The French photovoltaic industry benefits from great assets to position itself at a European level. In making full use of its innovative abilities through the country’s R&D centres and high-technology competitiveness clusters, France’s photovoltaic industry has the clear potential to become a major player on the European market.

Come and visit innovative PV actors and other companies on the French Pavilion at Intersolar 2015 hall A3-490 – Ebusiness.com­­­­