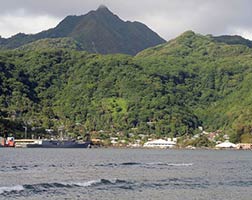 Geothermal power is one of the renewable energy projects the American Samoa Power Authority is undertaking as it attempts to reduce the territory’s reliance on imported fossil fuels.

The authority’s board chairman, Fonoti Perelini Perelini, says scientists have discovered that the selected sites as being adequate to produce electricity, and the drilling will help provide more conclusive data.

Fonoti says the chance of the drilling yielding a positive result is high.

The authority says that by 2020, 30 % of the territory’s electricity will be generated from renewable sources such as sun, wind, and geothermal, which will save the territory about 8 million dollars in fuel costs. – Radio NZ