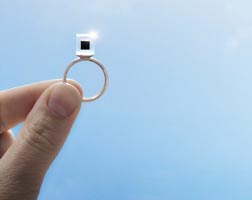 A massive purifier was installed in the Netherlands to absorb air pollution in urban parks. The Smog Tower was based on air filtering technology used in hospitals. But unlike regular air filters, this one turns smog into rings and cufflinks.

“On one hand we’re sort of disgusted by it,” said Daan Roosegarde, the tower’s designer “But on the other hand became fascinated. Like, this is not waste, you know, because waste in the future should not exist. And looking at this, and realizing that 42 percent of this exists out of carbon, and carbon, under high pressure, you get diamonds.” 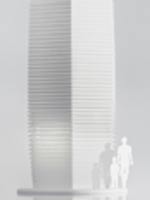 The ‘gems’ or Smog Cubes are actually compressed black smog encased in a transparent cube. Each cube contains pollution sucked from 1,300 yards of air. The cubes are on sale on Kickstarter as part of the campaign. 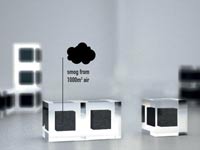 Roosegarde ‘s aim is for the Smog Tower to travel around the world, from city to city.

The Kickstarted page said “From Beijing to Paris. From Los Angeles to Mexico City. The tower lets citizens experience the value of breathing clean air. The Smog Free Tower is the first step in working together to free cities permanently of smog. Together we can fight air pollution.”