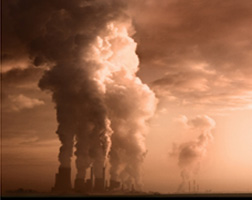 Average surface temperatures could increase up to 0.5 degree Celsius (0.9 Fahrenheit) more than previously projected by 2100 in the most gloomy scenarios for warming, according to a study based on a review of scientific models of how the climate system works.

The extra heat would make it harder to achieve targets set by almost 200 nations in 2015 to limit a rise in temperatures to “well below” 2C (3.6F) above pre-industrial times to restrict droughts, heat waves and more powerful storms.

“Our results suggest that achieving any given global temperature stabilization target will require steeper greenhouse gas emissions reductions than previously calculated,” authors Patrick Brown and Ken Caldeira of the Carnegie Institution for Science wrote in the journal Nature.

The United Nations says that current government pledges to limit emissions are already far too weak to achieve the goals set by the 2015 Paris Agreement and put the world on track for a warming of more than 3C (5.4C)

William Collins, a professor of meteorology at the University of Reading who was not involved in Wednesday’s study, called it a “step-change advance”.

“We are now more certain about the future climate, but the bad news is that it will be warmer than we thought,” he wrote in a comment.

The report examined existing scientific models of how the sun’s energy reaches the Earth and how some bounces back into space from clouds and the planet’s surface.

Such simulations, based on ever more years of satellite observations, help to understand the climate and make temperature predictions.

The models that best represent the recent climate “tend to be the models that project the most global warming over the remainder of the twenty-first century,” the scientists wrote.

In one pessimistic scenario, under which greenhouse gas emissions continue to rise until 2100, temperatures could rise by 4.8C (8.6F) against 4.3C (7.7F) estimated by a U.N. panel of experts in 2014, they said.

Models are a lynchpin of the Paris accord, which seeks to re-direct trillions of dollars of investment to cleaner energy such as solar and wind power from fossil fuels.

U.S. President Donald Trump dealt a blow to the pact by saying he will withdraw and instead promote the U.S. fossil fuel industry. He doubts mainstream scientific findings that man-made emissions are the prime cause of warming.

In September, another scientific report suggested that humankind might be able to emit more greenhouse gases than expected before breaching the Paris temperature goals.

Piers Forster, a professor of climate change at the University of Leeds who was an author of that study, welcomed Wednesday’s findings as a piece in a wider puzzle.

“It’s important to take account of all lines of evidence,” he said.