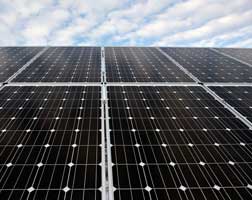 Google Inc. is making its largest bet yet on renewable energy, a US$300 million investment to support at least 25,000 SolarCity Corp. rooftop power plants.

Google is contributing to a SolarCity fund valued at US$750 million, the largest ever created for residential solar, the San Mateo, California-based solar panel installer said Thursday in a statement.

Google has now committed more than US$1.8 billion to renewable energy projects, including wind and solar farms on three continents. This deal, which may have a return as high as 8 %, is a sign that technology companies can take advantage of investment formats once reserved only for banks.

“Hopefully this will lead other corporations to invest in renewable energy,” SolarCity Chief Executive Officer Lyndon Rive said in a phone interview.

The deal reflects the success of renewable energy companies in tapping into a broader pool of investors with financial products that emerged in the past three years, either paying dividends or sheltering cash. Those helped boost investment in clean energy 16 % to a record US$310 billion last year, according to data compiled by Bloomberg.

The Google deal is structured as a tax-equity transaction, meaning the web search developer gets tax breaks that flow from solar systems financed by the fund. Earlier this week, First Solar Inc. and SunPower Corp. said they’d form a yieldco, a business model that channels income from operating wind and solar farms into dividends for investors.

Renewable-energy projects are entitled to various tax benefits, including a credit for 30 % of the installed cost of a solar power system. Unprofitable companies, such as SolarCity, often can’t use the credits and provide them instead to tax-equity investors

Google announced a similar deal in January, agreeing to invest in the tax credits generated by a $188 million solar project in Utah being built by Scatec Solar ASA.

This type of investment has typically been provided mostly by banks, and the supply of tax credits exceeds the demand for tax-equity financing, Rive said. The rates solar developers pay in such deals has increased since 2008 even as interest rates fell to near zero.

Back then a typical tax-equity deal might pay an after-tax rate of return of about 7 %. Today, Rive said they pay at least 8 %. Attracting more corporate investors to this type of deal may boost demand and let developers pay less, reducing the industry’s financing costs.

Google is supporting a variety of new technologies, ranging from driverless cars to mobile-phone payments. Companies such as Google and Apple Inc. that have amassed large piles of cash are under increasing pressure to find profitable ways to use their money, and some are supporting new concepts and infrastructure that may have long-term benefits for the planet that go beyond the bottom line.

For Google, it’s a good way to reduce their tax bill and support development of renewable energy.