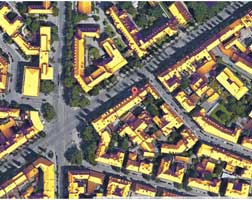 Google has partnered with German energy firm E.ON and software producer Tetraeder to bring Project Sunroof to Germany. Project Sunroof, the tech giant’s initiative, aims to make it easy for homeowners to determine whether or not their roof is viable for solar panels.

Expanding beyond the US, the project will now be available to German homeowners who want to find out just how much money they might be able to save by switching to renewable solar energy.

“We launched Project Sunroof in the United States in 2015 to help answer this question and help consumers make accurate decisions about solar power for their homes. Starting today, people in Germany will be able to see the solar potential of their rooftops thanks to a partnership between Project Sunroof, E.ON and the software producer Tetraeder. This marks the first time Project Sunroof data will be made available outside of the US,” said Joel Conkling, Product Manager, Project Sunroof.

The new solar potential data is partially thanks to help from E.ON as well as Tetraeder. Google says that the system currently covers somewhere around 40% of German homes (around 7 million buildings), in Munich, Berlin, Rhine-Main the Ruhr area, and elsewhere.

It estimates how much sunlight falls on the roof, accounting for historical weather patterns, the location of the sun throughout the year, the geometry of the roof, and shading from nearby objects such as trees and buildings. All of these factors are then integrated to estimate solar energy generation potential for a particular address.

Just as has been possible for a couple years for people living in the US, Project Sunroof’s website now provides information on German homes. Homeowners just have to head over to the Sunroof website and type in their address. From there, they can tell Sunroof roughly what their electric bill is, and it will tell them how much they could save (or not) by leasing, loaning, or buying solar panels.

For those that are ready to hit the ground running, Google says that data from Project Sunroof is also available on E.ON Solar’s German website. In addition to seeing their home’s solar potential, people will be able to actually purchase a suitable system consisting of photovoltaic modules, energy storage and system management software provided by E.ON.