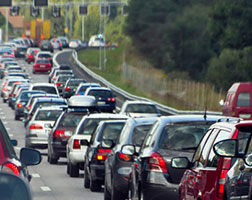 Businesses could save €28 billion (£20.26bn) a year by switching to greener and more efficient cars.

A new report claims corporate managers have more control over the composition of the atmosphere than most politicians or oil executives.

It suggests changing road behaviour can reduce fuel costs and emissions up to 20% and retrofitting tyres and weight reduction can cut emissions by 45%.

Transport is said to be responsible for nearly a quarter of greenhouse gas emissions and road transport accounts for 81% of that.

European company fleets produce up to 380Mt of carbon dioxide per year and 29,000 deaths have been caused by pollution in the UK annually, claims sustainability consultant CE Delft and Greenpeace, which published the report.

Barbara Stoll, Greenpeace Senior Climate Campaigner said :“Fleet managers have a surprising amount of power over all of our futures and with the rapid progress being made in clean tech, they can use that power for good and on a grand scale. Hopefully the enormous potential cost savings will help – instead of asking for sacrifices, we’re just asking them to sacrifice a bit less to oil companies.” – Energylivenews.com