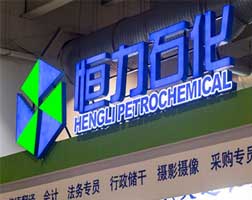 China’s Hengli Petrochemical is planning to add another two 2.5 million-tonne/year purified terephthalic acid (PTA) production units in south China. The two new units are scheduled to start up at the end of 2021.

Hengli will invest about US$1.69 billion to build the units in the Daya bay petrochemical park at Huizhou in Guangdong province, subject to governmental approvals.

In September, Hengli’s competitors such as Yisheng, Sanfangxiang Petrochemical and Dongying United Petrochemical have all announced plans to expand production capacity.