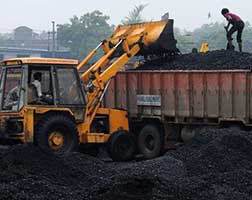 DAVOS, Switzerland – India expects to hold auctions for private firms to mine and sell coal in the near future, the country’s coal and power minister PiyushGoyal said but first wants to deal with mines that are directly linked to plants that use the fuel.

To boost output and cut imports, Prime Minister Narendra Modi passed an executive decree in December to open up India’s nationalised coal industry. Bids have been invited from firms that use coal for their own power, steel or cement plants.

“Once my actual user requirements are broadly met, I’m hoping to start opening up to private miners,” Goyal said on the sidelines of the World Economic Forum in Davos.

“I’ve not applied my mind entirely to it, but I don’t know whether the entire process for all the actual users could be done within this year. But somewhere in the near future I do see that happening.”

Indian conglomerates such as the Adani Group, controlled by billionaire GautamAdani, and GVK are likely to bid for commercial coal blocks to cash in on fast-rising demand from the power industry.

Goyal also said the decks were clear for a 10%t sale of the government’s stake in Coal India Ltd, which could help raise about US$4 billion towards meeting the asset sale target of US$10 billion for the fiscal year to March-end.

“If the timing is right and it is in the interests of the government and the people of India that it should be this year, we’ll do it,” Goyal said at the “Make in India” lounge set up to attract investment to Asia’s third largest economy.

“But I’m not privy to timing exactly as we speak.”

In a major victory for Modi, Coal India workers unions earlier this month called off a five-day strike on its second day.

The five powerful unions of the world’s largest coal company opposed Modi’s move to sell a stake and open up the industry, but cancelled the strike after Goyal assured them a committee would be formed to address their concerns.