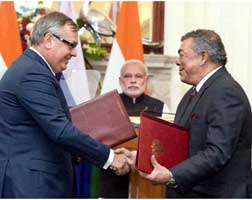 The potential to expand in the Asia-Pacific region and to supply fuel to countries like Indonesia, Vietnam, the Philippines and Australia is now in the table for Russia’s state-owned oil company Rosneft as they complete the US$13 billion acquisition of India’s Essar Oil, according to Rosneft CEO Igor Sechin.

The recently signed agreement is the biggest foreign acquisition in India. Rosneft is purchasing a 49% stake in Essar, with another 49% sold to a consortium of the Netherlands-based commodity trading house Trafigura and a Moscow-based private investment company United Capital Partners.

India is expected to become the fastest growing oil consumer through 2040, according to the International Energy Agency (IEA).

The deal includes the sale of nearly 2,700 Essar Oil filling stations and allows Rosneft access to a market of 1.3 billion people in a country that imports 80% of its crude requirements.