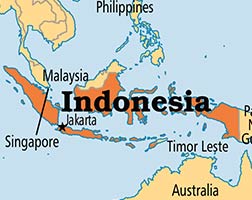 “On that occasion, five Power Purchase Agreements, and nine Memorandums of Understanding, would be signed and 13 licenses for geothermal power projects would be issued to business players,” the minister said addressing the opening of the Indonesia EBTKE conference and exhibition and Indonesia Geothermal Convention and Exhibition (IIGCE) 2015 here on Wednesday.

He said the investment has the potential to add 2,400 megawatts to the country’s power generating capacity from renewable energy. At the same time transfers of a number of micro hydro power plants, solar power plants, and biomass power plants with a total capacity of 575 kilowatts would take place to supply power for 1,215 families in isolated areas.

He said the contribution would come from geothermal power plants accounting for 1,751 megawatts, hydro power plants for 2,438 megawatts and “bioenergy” power plants 1,156 megawatts. A combination of power generated by solar power plants, wind energy, sea waves, and other renewable energy facilities would contribute around 3,405 megawatts.

“For that purpose we would need Rp403 trillion in short term investment in the next five years. It is more expensive than investment in conventional energy,” he said, stating that implementation of the 35,000 MW program would be a challenge that needs hard work and cooperation between all stakeholders.

“It is true that implementation of the 35,000 MW program is not easy, but it is a necessity that we have to fight for,” he said. He called for support from all to bring to reality the target.

“Today, 19 % of the power plants under the 35,000 MW program are under construction, and the PLN (national power utility company) says Power Purchase Agreements have been signed with a number of Independent Power Producers,” he said. Licenses have been granted for 13 geothermal power projects having a total capacity of 1,515 megawatts, with a total investment of Rp81 trillion and providing 4,500 new jobs, he added.

The nine MoUs include those signed by the EBTKE directorate general with Pace Energy Pte Ltd from Singapore to develop wind energy in the district of Malingping, Lebak, Banten with a capacity of around 150 megawatt; with Indo Wind Power Holdings Pte Ltd, also from Singapore, to develop wind energy in the regencies of Jeneponto and Timor Tengah Selatan with a capacity of 132.5 megawatts; and ones signed by PLN with SBS International Ltd. to develop sea wave energy in the Alas strait, Lombok strait and Badung strait with capacities of 12 to 140 megawatts and a cost off US$350 million.