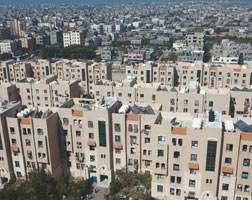 Mohamed al-Ammadi, chairman of the Qatari committee to construct Gaza, said that Israel has agreed to supply natural gas to the only power station in the Gaza Strip.

“We sent a request to the Israeli side to supply the Gaza Strip with natural gas lines to operate the only power station in Gaza to generate 340 megawatts,” said al-Ammadi.

He said that “the Israeli side agreed in principle to the request … they (the Israelis) are studying the whole project.”

Al-Ammadi said the project was discussed between the Palestinian National Authority, Israel, and the international Quartet (US, Russia, the EU, and United Nations.)

“The Quartet nominates a special advisor to follow up the implementation of the plan and study all the technical details of the project,” he said. “In case Israel gives its final answer, the contracts will be signed.”

Al-Ammadi said that he is also working with the Israeli private sector to build a solar power station to provide Gaza with 100MW of electricity.

“I hope that these projects will succeed and will see the light soon to resolve the problem of the power shortage in Gaza,” said al-Ammadi.

Recently, the Gaza Energy Corporation said that a severe shortage of fuels may soon lead to shutting down the only power station supplying electricity to the Gaza Strip.

According to the corporation, Gaza needs 320MW per day, but the power station generates only 65MW, while Egypt supplies Gaza with 22MW, while Israel supplies 120MW.