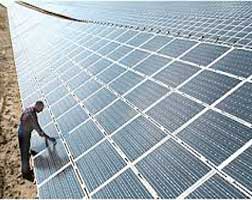 There is a gradual shift in the energy mix taking place in Japan, with solar power eventually replacing uranium and fossil fuels as a preferred power source. The large oil-fired power plants that once fueled the Japanese economy are being shut down one by one.

To replace those costly and polluting plants, several new power plants are coming up, including a US$1.1 billion solar farm on a salt field in Okayama, as well as two large arrays over water in Kato City.

By March 2016, Japan plans to take further steps to align energy infrastructure with alternate fuels, by doing away with close to 2.4 gigawatts (GW) of oil-run power plants.

Since the Fukushima disaster, nuclear power as an energy source has stagnated with solar power emerging as a feasible substitute. Up to 43 nuclear power plants have had to be shut down due to the disaster at the Fukushima nuclear plant, following the devastating tsunami in 2011.

The rise of solar power in Japan can be gauged from the fact that since the Fukushima disaster, renewable energy capacity has risen by three times to 25GW, of which over 80% is solar. The country is now amongst the four largest markets in the world for solar panels.

The Japan Renewable Energy Foundation said that solar power in the country will become cost-effective as early as the current quarter. That means it would no longer require government subsidies.

With Japan close to the realization of profitability in its solar projects, the entire G7 group of countries is likely to achieve economic feasibility in solar power, according to consumer groups, governments, and industry.

According to the Executive Board Chairman of JREF, Tomas Kaberger, solar power had now firmly become the alternate power source to import fossil fuels and uranium in Japan.

Analysts see a boom in solar to be just around the corner with improvements in technology and the decline in prices of photovoltaic panels.

The consultancy Wood Mackenzie said that distributed and utility level solar technology had the greatest potential to alter the energy markets.

Exxon Mobil Corporate has forecast solar capacity to increase over 20 times from 2010 to 2040.

Investors have a positive sentiment on solar energy. There has been a 40% increase in the global solar index, which had experienced a crash during the financial crisis between 2008-2009.

Solar power has advanced than some of the other commodities, such as coal, copper, natural gas, and iron ore, which have been struggling due to the global decline in energy prices. Since the start of the year, the Guggenheim Solar ETF has experienced a 42% gain and has outperformed the S&P 500 Index, which gained 2.9%. The Guggenheim Solar ETF replicates the performance of prominent companies across the globe involved in the solar energy industry. – Bidness Etc