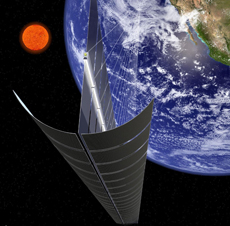 Japanese scientists are developing a spacecraft that will have a square screen of solar panels measuring more than 1.2 miles along each side and use microwaves to beam energy down to Earth.

Researchers from the Japan Aerospace Exploration Agency (JAXA) are working with Japan Space Systems to solve one of the enduring problems associated with the most common form of renewable energy; it does not work at night and is inefficient in bad weather.

Solar panels that are not affected by weather and gathered by a Space Solar Power System (SSPS) positioned to constantly face the sun are able to generate an estimated 10 times as much power as Earth-based solar panels.

The scientists estimated that one SSPS unit will be able to generate around the same amount of energy as one nuclear reactor.

They said that while the concept of a space-based solar energy system is not new, it has previously faced technological problems that have yet been resolved, including developing a system to transmit energy from the spacecraft to the Earth.

In an experiment in March, Japan Space Systems succeeded in converting 1.8 kW of electricity into microwaves and transmitting it over a distance of more than 180 ft to an antenna where it was converted back into electricity.

The research is focusing on microwaves because they travel in a straight line and can penetrate even thick clouds.

Another major consideration is the receiver on Earth that will “capture” the energy, with the scientists’ proposals including a receiver as much as one mile in diameter floating on the sea and linked to the power grid.

Equally challenging will be the task of transporting the components for the SSPS into space and assembling them. Maintenance and repairs will need to be carried out by robots and the scientists are hoping that each craft will have an effective lifespan of 40 years.

Despite the recent breakthroughs, experts believe it will be at least 30 years before the first SSPS is ready to go into operation.