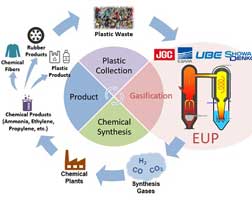 Promotion of plastic waste recycling has become a global issue, as seen in the ocean microplastic problem. While Japan’s plastic recycling ratio is 86%, only 13.5% of the plastics waste are recycled as resources and the rest is exported to other countries or thermally recycled (fiscal 2017). Furthermore, establishment of resource recycling systems is urgently needed in Japan and other countries amid tightening regulations for solid waste import in China and Southeast Asian countries.

Gasification chemical recycling of plastic waste is capable of decomposing a mixture of various kinds of plastics and impurities, which presents difficulties for other recycling methods, into the molecular level and regenerating various chemical materials. It should contribute to substantial improvement of the recycling ratio.

The EUP, which was developed by Ebara Corporation (transferred this business to Ebara Environmental Plant in 2009) and Ube Industries in 2000, is a process that gasifies plastic waste using partial oxidation with oxygen and steam, and produces synthesis gases that can be utilised in synthesis of ammonia, olefins, and other chemicals.

A gasification facility steadily operating at Showa Denko’s Kawasaki Plant (plastic waste processing capability: approximately 70,000 tonnes/year) since 2003 applies EUP. This is the only technology for gasification chemical recycling in the world with a long-term track record of commercial operation. 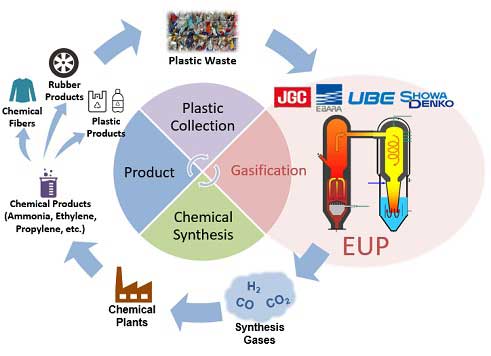 The four companies (JGC, Ebara Environmental Plant, Ube Industries, and Showa Denko) aim to conclude an EUP licensing contract within the year, and then actively implement sales efforts for gasification facilities for plastic waste adopting EUP in Japan and other countries and conduct EPC activities. They also intend to promote the spread of gasification chemical recycling and use of recycling in Japan and other countries via proposals for chemical production facilities utilising ammonia, olefins, and other chemicals made from facilities which adopt EUP.

As an engineering company, JGC has accumulated gasification-related engineering technologies by handling many plant facility construction projects that adopt gasification processes, including overall management for construction of the first commercial Integrated Gasification Combined Cycle (IGCC) plant in Japan that was completed in 2003.

Ebara Environmental Plant has accumulated extensive technology information related to low-temperature gasification equipment used in the gasification system, the main characteristic of EUP technology, based on its proprietary fluidised bed technology. EUP technology, which was commercialised jointly with Ube Industries, extracts gases with value as feedstock from combustible materials incinerated in past years.

Since 2003, Showa Denko has been operating a business that effectively utilises hydrogen and carbon monoxide obtained from plastic waste using a EUP-based gasification facility as raw materials to produce ammonia and carbon dioxide products, such as liquefied carbon dioxide and dry ice. It possesses technologies and operational knowhow for stable production over a lengthy period under a condition in which different kinds of plastic waste and impurities including metal are input into the gasification facility as raw materials.