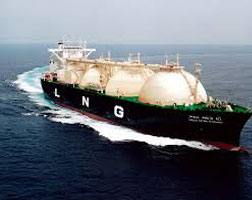 TOKYO – A venture set up last month by Tokyo Electric Power (Tepco) and Chubu Electric Power to handle their fuel business aims to become the cheapest liquefied natural gas (LNG) buyer in East Asia, its president said in an interview.

Jera is set to become the world’s single biggest buyer of LNG – exceeding Korea Gas Corp with annual purchases of nearly 40 million tonnes once it fully integrates the partners’ fuel procurement operations next year – and plans to use its bulk to drive prices lower, President Yuji Kakimi told Reuters.

“Jera has a role to play in tackling how to reduce Asian prices,” he said. “The target is the cheapest price in East Asia that is not out of line with prices in Europe and the United States,” he said.

Asian buyers of natural gas have traditionally paid higher prices, a so-called Asian premium to gas prices in the United States and Europe because of the high cost of LNG delivered on tankers and relatively less extensive pipeline networks.

The shutdown of all nuclear reactors following the Fukushima nuclear disaster in 2011 also forced Japanese utilities to import record amounts of coal and expensive LNG for power generation, pushing prices even higher.

Prices for LNG are typically linked to oil and have come down in recent months with the slump in crude prices since last year. But Japan’s average long-term contract import price in March was still US$12.27 per million British thermal units, compared with US$2.84 per mmBtu for gas delivered by pipeline in the United States.

Japan’s price includes chilling the gas to liquid for transport on tankers and returning the fuel to its burnable state on arrival in Japan.

Jera’s bulk purchasing power could be a swing factor in decisions on LNG projects that require huge investment and require large long-term contracts to ensure their viability.

Kakimi said, for example, that Jera could buy up to 4 million tonnes a year from a single new project.

Jera also will try to limit oil-linked supplies to around 50 % of purchases or less, while increasing the share of supplies linked to U.S. or European natural gas benchmarks, he said.

Such a shift could be an effective tool to reduce destination clauses in contracts that limit opportunities for trading, especially if gas-linked purchases were done on a free on board (FOB) basis, Kakimi said.

Jera is already handling all new long-term fuel purchases, and over the year to mid-2016 will take over in phases the shareholders’ procurement, transport and trading businesses.