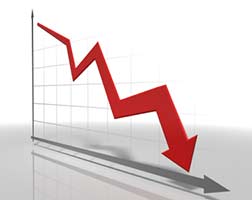 The situation is getting bad for KKR & Co.

Its energy buyout Samson Resources Corp., is about to enter bankruptcy by September 15.

Last year Energy Future Holdings Corp. sought court protection. The two debacles could vaporize most of the roughly $5 billion that investors in a KKR private-equity fund and the firm sank into the deals.

The plunge in energy prices has walloped the private-equity and hedge fund industries. Since mid-2014 these firms have seen more than $17 billion erased from select public energy producers, according to data compiled by Bloomberg. Apollo Global Management LLC, Riverstone Holdings and Carlyle Group LP are among those suffering setbacks.

KKR’s energy losses stand out because they come chiefly from two massive bets: the $48 billion acquisition of Energy Future Holdings (formerly TXU Corp.), which is the biggest leveraged buyout on record; and the $7.2 billion Samson purchase, the second-largest private-equity deal of 2011.

“KKR levered their energy bets to the hilt and ended up in the woodshed,” said Erik Gordon, a professor of business and law at the University of Michigan.

Marc Lipschultz, 46, who joined KKR 20 years ago after a stint at Goldman Sachs Group Inc., has led the firm’s energy and infrastructure investing unit since 2009 after serving as its co-head. Co-founded by billionaires Henry Kravis and George Roberts, KKR manages $101.6 billion in assets.

Anita Davis, a KKR spokeswoman, and Lipschultz declined to comment for this story.

KKR’S 2006 Fund LP, a $17.6 billion buyout pool, provided about $3 billion for the Energy Future Holdings and Samson deals. KKR itself invested about $700 million in the two companies through its stake in the fund and from its balance sheet. A group of KKR’s largest fund investors separately put up the remainder of the firm’s stakes in the energy companies.

They failed because of their high debt loads and falling energy prices. Revenue at Energy Future Holdings, a Dallas-based utility that’s being reorganized, is tied largely to natural gas prices, which have sunk 62 % since KKR bought the company. Tulsa, Oklahoma-based Samson gets about two-thirds of its revenue from natural gas and gas liquids.

Despite the two energy disasters, KKR’s 2006 fund has notched a 9 % annualized return after fees, thanks to gains from Dollar General Corp., Alliance Boots and other deals. That matches the performance of the fund Blackstone Group LP raised in the previous decade, while falling short of Carlyle and Apollo’s fund returns.

If KKR had broken even on Energy Future and Samson, its fund’s overall profit would top $17 billion instead of $14 billion. The firm and its clients garnered close to $200 million in advisory and annual management fees from Energy Future Holdings, and more than $100 million in fees from Samson, according to company filings.

Lipschultz and his managers have a mixed record with other investments. A $900 million fund that KKR began raising in 2010 to buy producing oil and gas operations had a minus 39 % annualized return after fees through June 30. And a $2 billion fund it completed raising last year to develop oil and gas properties was valued at 8.5 % below investment costs.

Some KKR energy bets have paid off. In 2010 and 2011, the firm scored a combined profit of $1.9 billion by selling East Resources Inc. and Hilcorp Energy Co., more than tripling its money. A $1.1 billion investment in Colonial Pipeline Co. in 2010 has produced more than an 11 % annualized return after fees.

KKR hasn’t made any new oil and gas private equity investments in North America since January 2014, just months before a drop in energy prices.