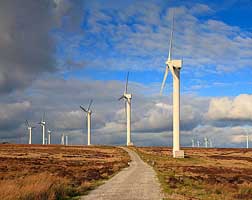 Under the PPA, the firm will construct, own, operate and maintain the wind project with Kenya Power purchasing the power generated.

“The PPA is an important step forward in enabling the country meet its development goals utilizing renewable power that is cost effective and environmentally friendly,” said the Cabinet Secretary for Energy and Petroleum, Mr Henry Rotich.

Renewable energy (hydro and geothermal) currently accounts for over 85% of the country’s energy mix, said Mr. Rotich. He added that wind energy is part of the country’s strategy of diversifying the 5,000 MW additional generation capacity to ensure adequate power as well as reduce the overall cost of electricity.

”This 100 MW PPA provides the Kipeto stakeholders the off take certainty needed to advance the project and provides Kenya Power with an important addition to their generation plan,” said Eng. Joseph Njoroge, Principal Secretary for Energy and Petroleum.

Eng. Njoroge said that the project is one of the biggest committed wind power projects in the region and second to the ongoing 300 MW Lake Turkana Wind Project. “The PPA has a term of 20 years after the power plant commercial operation date. Project development and construction activities will be carried out in 18 to 24 months starting November this year,” he added.

OPIC President and CEO, Elizabeth Littlefield, said the organisation is proud to support the wind project and its role in improving the country’s development adding that the “financial support to Kipeto is a significant step in OPIC’s pledge to President Barack Obama’s Power Africa Initiative.”

Wind energy currently stands at a negligible 0.4% in the country’s energy mix but this will significantly change in the coming years with the introduction of wind energy from Lake Turkana and Kipeto projects both of which will add a total of 400 MW. – KBC