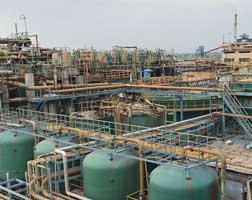 A leading producer of chlor-alkali products on the Indian market is said to have benefited from the improved efficiency of its chlor-alkali electrolysis by applying the new Lewatit MDS TP 208 as ion exchange resin from German chemical firm Lanxess. The finely dispersed polymer beads reduce the energy input effectively by preventing damage to the ion exchange membranes used for electrolysis and thus extending their lifespan. Consequently, this new generation of finely dispersed resins is being successfully introduced alongside the MonoPlus types.

The chemical plant in the south of India has a production capacity of approximately 190 kilotonnes/year of caustic soda requiring a quantity of around 400 cu m/hour of sodium chloride brine. The brine used for electrolysis needs to be pretreated to protect the electrolysis membranes from high levels of impurities. Otherwise precipitations can harm the membranes, for example, resulting in a less efficient process. The new Lewatit MDS TP 208 finely dispersed ion exchange resin is being used in one of three filters of one brine treatment line to optimize brine purification. The resin reduces the hardness of the brine from an incoming level of 2 mg/l to below 10 µg/l. The chemical plant also has an effective process for removing barium and strontium levels to a concentration of below 100 µg/l.

The use of the Lewatit MDS TP 208 chelate resin from Lanxess enables effective economic advantages for the plant operator, in particular in terms of significant energy cost savings.

Further advantages include a longer lifetime for the membranes and the resin. Additionally reduced quantities of regeneration agents are required and a reduction of wastewater is expected to lower operating costs. The resin type used is capable of achieving longer cycle times, which in turn generates a higher brine treatment throughput. Based on the positive results, the Indian producer decided to switch the other two resin filters of this line to Lewatit MDS TP 208 as well.

Since installation of the resins in 2016, the customer is said to have enhanced the capacity of this brine treatment line by 53% in two years. The use of Lewatit MDS TP 208 has increased the throughput from 3,035 BV (bed volumes) to 4,662 BV, says Lanxess.