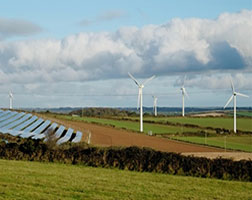 The UK’s greenhouse gas emissions plunged by 8.4% last year, as household energy consumption slumped, the use of coal for electricity generation fell, and policies on climate change took effect, according to government statistics released on Thursday.

Carbon dioxide output fell by almost a tenth, as renewable energy generation rose to a new record high, accounting for nearly a fifth of electricity.

It was the biggest fall in emissions since 1990. Over the last five years, following a sharp fall in 2009, emissions appeared to have reached a plateau, with slight rises in some years owing to increasing coal use. The price of coal has dropped on world markets, as shale gas has sapped demand in the US, leaving a glut.

Green campaigners welcomed the fall, but they warned that more must be done to reach targets.

In part, the slump in carbon output was down to record average high temperatures across the UK in 2014, which drove down demand for heating and led to a big drop in household energy consumption – even though bills rose over the year.

The emissions fall was a boost to Ed Davey, secretary of state for energy and climate change, ahead of a difficult general election for the Lib Dems. The party has traditionally relied on its green credentials with voters, but this has been a harder sell when in coalition.

Davey said: “2014 was truly record-breaking year for low carbon generation. Our plan to decarbonise the economy while it grows is working – we’ve reduced our emissions by 8%, increased the amount of electricity we’re getting from renewables and seen the economy grow at the same time. It is crucial we continue to build a low carbon energy sector based on home grown sources, as it is crucial to improving our energy security, as well as stimulating economic growth and reducing emissions.”

The fall will also strengthen the UK’s position at the Paris climate talks this December, where world governments are expected to agree to greenhouse gas targets to take effect beyond 2020, when current pledges expire. By 31 March, all countries are expected to submit their proposals on how far they will cut emissions, in the case of developed countries, and on proposed curbs to their emissions growth, in the case of poorer nations. Some may miss the deadline, but the EU, the US and China have already made public their pledges.

These pledges will then be considered to decide how fair they are and how far they take the world to the cuts in greenhouse gases needed to prevent global warming from exceeding 2C, regarded as the threshold of safety, beyond which climate change is likely to become catastrophic and irreversible.

Emma Pinchbeck of WWF said: “Falling carbon emissions from the energy sector is welcome news and shows that action on carbon emissions gets results. While this drop is positive, we must remember that more ambitious carbon emissions reductions are required across different sectors to meet our climate change commitments.”

Green groups pointed to the rise in renewable energy generation, which hit 19% last year, as a key factor in the emissions fall. However, the future of onshore wind – the biggest and cheapest generator of large-scale renewable power – is in doubt as an incoming Conservative government would end subsidies for the technology and might bring in tougher regulations on the building of new wind farms.

Doug Parr, chief scientist at Greenpeace UK, said: “This is further evidence, if it was needed, that efforts to cut carbon and boost our economy can go hand in hand. Since a reduction in coal use was a crucial factor in bringing down carbon dioxide emissions, these figures give us a taste of what could be achieved if our political leaders got serious about phasing out the dirtiest of all fossil fuels and gave proper backing to clean energy.” – The Guardian