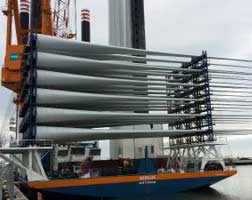 The Eneco offshore wind farm is located some 23 km off the coast of the Dutch cities of Zandvoort and Noordwijk. On a total area of 25 sq km, 43 modern wind turbines have been built here. In cooperation with Van Oord, a global specialist for hydraulic engineering, coastal engineering and demanding sea transports, RUD developed a highly individual lashing solution for the transport of the 50-m long rotor blades on the installation ship.

The construction of the plants, owned by the energy suppliers Eneco and Mitsubishi, took several years. Already at an early stage, Van Oord had involved RUD in the transport process planning for the total of 129 rotor blades. They should be transported in a special steel frame – called a rack – mounted on the transport surface of the ship. This rack carries 24 rotor blades. The wind park was the first project for the 140-m-long installation ship “Aeolus” built in Germany after its commissioning. The fully loaded rack was to be transported on every trip – alongside eight towers and machine houses.

The two halves of the rack represent very high and narrow constructions, which have to be stabilised with lashing equipment in order to withstand the transport loads and wind loads. Van Oord had clear requirements. For example, at each of the 160 force transmission points the lashing equipment had to have a strength of LC = 10,000 daN (Lashing Capacity). Their elongation should be minimal, their weight as low as possible and also the manpower required for lashing as low as possible.

RUD developed the solution for this demanding task together with Van Oord’s engineers. During a two-day visit by the Dutch at RUD in Aalen, the engineering of the complete lashing system was carried out. The product specialist Alexander Hoffmann was the responsible leader at RUD. At the centre of this solution were RUD ICE lashing chains systems 10 mm quality class 12, consisting of chains, tensioning elements and end components such as hooks and shackles.

There was another specific requirement as a result of the enormous clamping lengths of more than 20 m. Any slack in the lashings had to be reduced to a minimum with the smallest amount of effort possible. So a combination of the tried and tested ICE lashing chains system and UHMWPE ropes were used.

The bottom, 2-m long end was realised with the ICE system. The main handling – shortening and tightening – takes place at this part of the lashing. The ICE system offers particular advantages here. As the 10 mm ICE system replaces a 13 mm system of the usual quality class 8 with the same LC, it is 40% lighter. The precise length by links in 30 mm steps reduces the time for pretensioning considerably compared to other solutions considered.

The long end was realised with UHMWPE ropes. They performed the task of transferring the retention forces securely and cost-effectively with little weight and low stretching.

The lashing and transport of the rotor blades went smoothly. Thanks to this project, RUD was once again able to demonstrate its enormous development and project competence, especially in the particularly demanding offshore sector. According to Eneco, the forecast annual standard capacity of the wind farm is 530 GWh. This is roughly equivalent to the annual electricity consumption of 135,000 households.