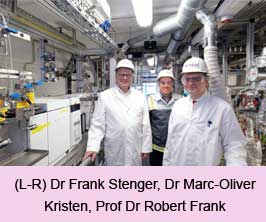 MACBETH (Membranes And Catalysts Beyond Economic and Technological Hurdles), the largest EU-funded research project coordinated by German speciality chemicals company Evonik, has reached its first milestone after 18 months in operation. The EU Commission has evaluated the project for the first time, with positive results. The goal of MACBETH is to develop technologies that make important large-scale reactions, such as hydroformylation, significantly more energy efficient. The supervisors believe that the partners involved are on the right track.

Carmine Marzano, project officer at the European Health and Digital Executive Agency (HaDEA), responsible for all administrative aspects of MACBETH on behalf of the EU Commission expressed high satisfaction with the results, saying that all subprojects are on schedule and well on track. Prof Dr Annette Juhr, a reviewer and a professor of process engineering at Beuth University in Berlin and responsible for monitoring said that the success of MACBETH would be revolutionary for several important reactions in the process industry.

“With the positive evaluation, we have secured the support of the EU and achieved a very good interim status,” says Prof Dr Robert Franke, project coordinator for the overall MACBETH project and head of hydroformylation research at Evonik.

At the virtual review meeting held in June, all the project partners, the project officer for the EU Commission and the project reviewer came together to get an update on the current status.

The EU is funding the measure with a total of EUR16.6 million. Twenty-four partners from ten countries are working on four subprojects until 2024, with the aim of making large-scale reactions more energy efficient. One subproject is being carried out at Evonik at the Marl Chemical Park and concerns hydroformylation. The aim there is to develop so-called catalytic membrane reactors for industrial use. They are already working at laboratory scale with an objective of making them suitable for industrial use and to investigate the economic viability of the approach.

“We now want to make the leap from the laboratory to production,” says Franke. “Only when we conduct investigations in the production environment, can we make statements about the suitability of the technology. We need to test whether the process is suitable for larger production volumes and if it will work stably over the long term.” By the end of 2022, the plan is to set up a demonstration plant under real, industrial conditions at the so-called Oxo plant at the Marl Chemical Park.

There is expected to be a major impact on the sustainability balance of the reactions: since the new membrane reactors separate the resulting product directly from other components, previously standard, energy-intensive separation processes, such as subsequent distillations, would no longer be necessary. As a result, the researchers hope to achieve an increase in energy efficiency of almost 70% compared with conventional processes. This will also result a significant reduction in greenhouse gas emissions, Evonik says.