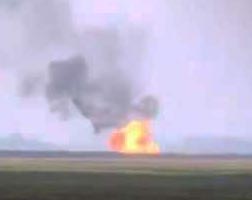 The ruptures occurred within hours of each other in Marshall County.

“Company personnel believe heavy rains in the area, which may have destabilized soils, were a contributing factor,” Williams spokeswoman Helen Humphreys told The Intelligencer and the Wheeling News-Register.

Humphreys said the pipelines were carrying condensate, a mix of petroleum products found in natural gas.

The company and the Department of Environmental Protection were working to determine how much condensate spilled into Little Grave Creek from the 4-inch pipeline.

Humphreys said company officials discovered the first leak after they learned of a “strong petroleum-based odor” about 8:45 p.m. Thursday along Little Grave Creek. The company isolated the rupture and closed the valve to the line to stop the condensate’s flow.

“Williams is mobilizing all resources necessary to mitigate any possible environmental impacts. As part of Williams’ investigation, the company is conducting numerous tests to understand whether and to what extent the waterways may have been impacted,” she said.

There were no evacuations after the first pipeline rupture. Residents of five homes in the area of the second rupture left their homes for a short time as a precautionary measure.

Humphreys said the ruptured 12-inch line collects natural gas from producing wells throughout the area for shipment to the nearby Fort Beeler plant.

A section of U.S. 250 was closed while workers turned off the gas stream running through the pipeline. The highway reopened about 11:45 p.m. Thursday, said county Emergency Management Director Tom Hart.