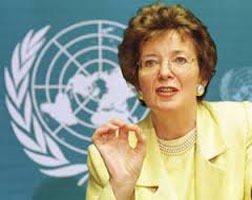 Tackling climate change will require developing countries to move beyond fossil fuels far more quickly than the rich world has managed, the United Nations envoy on climate change has warned.

Mary Robinson, former president of Ireland and ex-UN human rights chief, said: “It may seem contradictory, but to be fair all countries must be enabled to participate in the transition away from fossil fuels together and at the same time. If not, we will exceed the carbon budget and consign countries without the means to participate in the transition to renewable energy to a future based on expensive, obsolete and polluting fossil fuels.”

The poorest countries, she added, must lead the way in that transition with financial assistance from the rich world.

“They will need to meet their sustainable development goals without using fossil fuels. In other words, they will have to develop using a different model to that which made the industrialised countries wealthy. This is a different prospect than merely reducing emissions, and requires the absolute support of the international community.”

This would be a massive task, she made clear. “No country has developed without fossil fuels to date, so cooperation is key to providing the technology, finance, skills and systems to create an alternative way of developing.”

Her remarks, at a lecture for the Grantham Institute at Imperial College in London on Thursday night, were a counterpoint to views from the coal industry and others that poor countries would need to proceed along a high-carbon path of development until they have emerged from poverty.

In an article in the Guardian on Thursday, former US vice president Al Gore blasted the coal industry for what he claimed was a campaign targeting developing countries, as their developed country markets have declined.

Robinson said climate change was a matter of basic human rights, both in terms of the savage destruction it could do to developing countries, and in their need to raise people out of poverty while pursuing low-carbon power.

She insisted that the effects of global warming on people’s lives must be at the heart of climate policy, and called for leadership and ambition from developing and developed countries at the Paris conference on climate change later this year.

“It was not the science and the graphs or the pictures of polar bears on icecaps that brought me to climate change – it was the impact it was having on people’s lives and people’s rights. I met farmers unable to produce a harvest because the growing seasons had become so unreliable, and heads of state in African countries unable to plan their infrastructure development because of the impacts of floods and storms.”

Climate change also poses a particular threat to women in developing countries, she said, as they face the daily issues of finding sufficient food, water and fuel for their families.

The Paris conference would be crucial to ensuring global action on reducing greenhouse gas emissions, she said, but she warned that some might be setting their sights too low for the talks, and urged higher ambitions. “I worry about references to ‘managing expectations in Paris’ because there is a danger this will lead to too low a level of ambition to point us on a different course. We need leadership and ambitious action by all countries.”

She also criticised rich countries for failing to take adequate action to reduce their carbon emissions, and failing to provide promised resources to poor countries. “These obligations have not been met, and as a result have eroded trust and quashed ambition. Hence a commitment to lead by developed countries is critical to success this year.”

She said: “Now is not the moment to manage expectations or get cold feet. 2015 is the moment to catalyse a transformation.” – The Guardian